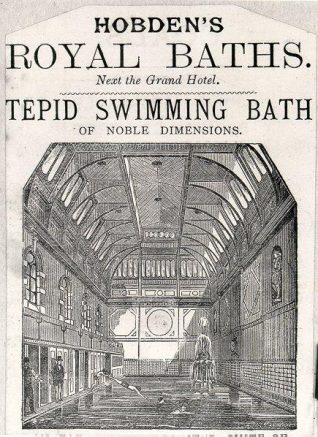 The Artillery Baths were built in 1813 by Mr Fernehough in Artillery Place, Brighton, to the east of Cannon Place and near the West Battery House. They were originally established by Nathan Smith, an inventor who patented an air pump which gave rise to the baths’ early fame. The pump was supposed to have given relief to sufferers of gout by extracting the air from a bell-shaped instrument placed over the affected area, which may have stimulated the flow of blood.

Hobden’s Royal Artillery Baths
The baths became “Hobden’s Royal Artillery Baths” in August 1824 when they were taken over by my great-great-great-grandfather Robert Hobden (1788-1861), formerly of Williams Royal Baths, Old Steine, Brighton, and the son of Richard and Elizabeth Hobden (nee Jenner). After Robert’s death in May 1861, the baths were carried on by his second wife, Mary Ann Frances Hobden (c1825-1880, nee Byner), and three years later the original building was demolished to make way for a more modern and better-equipped bathing establishment.

The new establishment in 1864
The new “Hobden’s Royal Baths” were open by November 1864. The ground floor was for gentlemen only, with cold, warm, tepid, douch, vapour and shower baths all available, each bathroom having its own adjoining dressing-room. There was direct access from each bathroom to a spacious waiting, lounging and reading room for the use of patrons either before or after their bath. The first floor was devoted to the ladies and offered similar facilities to those on the ground floor.

Many different facilities
In addition, there hung a rather unique clock – unique that is in that, instead of the usual Roman numerals, there appeared on the clock face the Roman letters “HOBDEN’S BATHS”. The clock was purchased from Boxell of Brighton with money donated by regular patrons. The basement housed the necessary machinery for supplying the baths with sea-water and for heating the bath water. It also contained a steam laundry, washing and wringing machinery, a steam drying room and linen closets which were heated by steam. Whilst business continued as usual, a swimming pool, 60 feet by 40 feet, was constructed at the rear of the building on the ground floor.

Officially opened in 1865
The pool was officially opened by the Mayor of Brighton, J L Brigden, in April 1865 in the presence of over eighty guests including the architect James Woodman. The ceremony having been completed, the Mayor led the guests upstairs to the first floor and into the adjoining Grand Hotel which had been opened eight months earlier, and which had its own direct access to Hobden’s Baths.

Following the death of Mrs Hobden (“Annie”) in August 1880, the baths came under the control of her daughter Margaret, who retained possession until the turn of the century when the Grand Hotel Ltd acquired the building.

The swimming pool under a ballroom
Although Artillery Place disappeared when the King’s Road was widened, the building is still there, occupied by the hotel ballroom on the western side of the hotel. The only alteration to the facade has been the addition of the semi-circular entrance canopy. The swimming pool remains to this day, concealed under the floor of the ballroom which is supported by brick pillars set on the floor of the pool itself. No doubt many people will have used the room in the hotel known as the Hobden Room; few will have realised the significance of that name.

NOTE: Following the terrorist bombing in October 1984, extensive re-building was carried out at the hotel. As a result the original swimming pool was lost, as was the Hobden Room, but when the hotel re-opened in August 1986 the new leisure centre in the basement was named the Hobden Health Spa in recognition of the connection with Hobdens Baths. (Alan Hobden, 8 October, 2003)