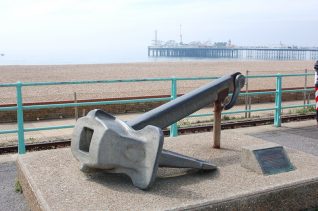 zoom
Anchor of the Athina B
Photo by Tony Mould 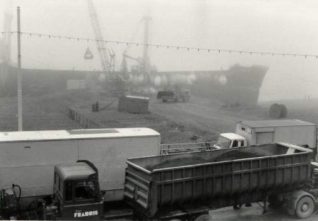 zoom
Athina B, 1980: Wreck of the Athina B on the beach near Kemp Town. Lorries and cranes in salvage operation.
Image reproduced with kind permission from Brighton and Hove in Pictures by Brighton and Hove City Council 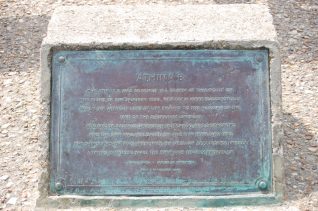 d) ATHINA B: On the promenade between Peter Pan’s and the Aquarium stands the anchor of the Athina B, a Greek cargo ship which ran aground on the beach below. On 11 December 1979 she sailed from the Azores for Shoreham loaded with 3,000 tons of pumice, but on arrival at Shoreham she remained outside the harbour and drifted eastwards as the weather deteriorated. Most of the crew of twenty-five were taken off by the Shoreham lifeboat in the morning of 21 January 1980, but the ship continued to drift, and the captain and the remainder of the crew were rescued at 9.15 p.m. Later that night the Athina B ran aground on the beach below Lower Rock Gardens and remained for nearly a month, providing a great tourist attraction as crowds flocked to the town, especially on the sunny weekend that followed; Volk’s Electric Railway ran an out-of-season service to provide a good view.
The ship was immediately declared a write-off, and was salvaged by Eurosalve Ltd. The pumice was off-loaded on 14 February, and the ship was eventually hauled off the beach at noon on Sunday 17 February on an unfortunately foggy day. With buoyancy tanks fitted to the sides, the Athina B was towed to Chatham and scrapped, but the anchor was returned to the town and is now exhibited on the Madeira Drive promenade with the beach below now known as the Athina bathing beach.
The Athina B was only one of many ships that have been driven onto Brighton beaches in the past. Especially notable was the Atlantique, which was wrecked on the Albion groyne on the night of 2 June 1860 with the death of one man. {141,160,274}