I was born  on 14th July 1930 at 257 Preston Drove Brighton, the elder son of Leslie S Strong and Joan M Strong (nee Quick). At that time Brighton was a vibrant special seaside town. It was special because it was somewhat cosmopolitan and a mixture of wealth and poverty, but it was also graced as it is today by the aura of the Regency period. The town was throbbing with entertainment, a rich mixture of fading Edwardian and contrasting modern pleasures – much of it visual and therefore entirely free of cost.

Visits to the beach

Between 1930 and 1936 we lived in the eastern part of Brighton, and in close proximity to the Marine Parade. My very earliest memories are of being taken by my mother to Madeira Drive, so that I could watch the comings and goings of Volk’s Railway. From five onwards, when living at a flat at 52 St George’s Road above a ham and beef shop, I recollect with great clarity going to the beach by way of the Kemp Town lift. The lift was operated by a man pulling ropes and was fascinating to a small child. 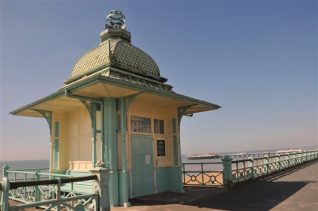 Other memories are of the Hospital Carnivals, and also the motor racing on Madeira Drive. I can also recall the very particular smell of the Tamplin’s Brewery at Paston Place. I do have a special recollection of  Gizzi’s Ice Cream Parlour which was at the bottom of St James’s  Street and housed in premises decorated in an art deco style.