You are here: HomenextPlacesnextSeafrontnextPort of BrightonnextOn official list of ports c1301 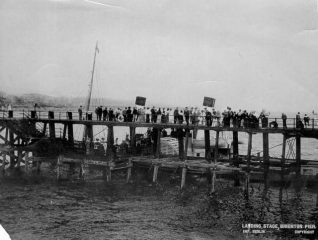 zoom
West Pier, c. 1898: Passengers queuing on the landing stage of the West Pier with paddle steamer at dock.
Image reproduced with kind permission from Brighton and Hove in Pictures by Brighton and Hove City Council

It has been suggested that a small creek once extended northwards from Pool Valley , and even that the area in East Street in front of the Sussex Tavern was the site of a wharf, but there is no direct evidence for either of these suggestions. Nevertheless, Brighton was always considered to be a port, forming part of the Port of Shoreham, and was named in the official lists of English sea-ports as early as 1301 and again in the mid sixteenth century when it was required to send ships and men for war fleets. In 1766 the limits of the Port of Brighton were officially marked for customs purposes by two four-foot-high stones set in the cliff top. The eastern stone, near the bottom of Ship Street , bore this inscription: ‘This and the other pillar at a distance of 600 feet westwards were erected to ascertain the boundaries of the Port of Brighthelmstone, anno 1766 by order of Sir William Musgrave, Bart, Samuel Mead, Edward Hooper and Henry Banks Esquires, Commissioners of the Customs’; it was removed when the sea-wall was constructed, but the western stone near the bottom of West Street remained until the late nineteenth century. As late as 1860 official notices referred to the Port of Brighthelmston.
The construction of a harbour at Brighton was first suggested in 1800, if not earlier, but the idea was generally opposed by residents who did not want the town to develop as a trading port. An 1806 plan by Ralph Dodd proposed piers at East Street and West Street , but was rejected at a town meeting. In 1824 William Bush constructed a small dock near Black Rock to allow for the easy offloading of building materials for the Kemp Town estate, which were then carted through the Black Rock tunnel , but it was probably dismantled when the estate was virtually complete {46}. An 1841 scheme by Captain J.N.Taylor won vestry approval for an experiment, and three large, floating breakwaters were moored to the Chain Pier on 23 December 1844 and left for about a year, but the sections were then towed to Shoreham and no more was heard of the scheme; one section was, however, washed up on Brighton beach and the timber sold for £148. In 1842 George Wigney proposed the construction of two breakwaters from West Street and Royal Crescent around the Chain Pier, and other schemes followed in 1846, 1850, 1884 and into the twentieth century. All came to nothing though, until the construction of Brighton Marina at Black Rock in the 1970s, but even then a plan was made in April 1974 for a second marina incorporating the two piers.
The principal French port for Sussex traffic is Dieppe, which lies 72 miles distant from Brighton although both F..e/.camp and Boulogne are nearer at 68 miles. In 1764 a regular packet service commenced between the two towns, but following the end of the Napoleonic Wars there was a great increase in traffic such that there were nine packets on the route in 1817 and nearly 2,500 passengers were conveyed to France during that summer. The Swift, the first of many steam ships on the route, made its maiden journey on 25 May 1822; soon after, the General Steam Navigation Company put on two vessels which made the journey in about ten hours.
Cross-Channel passengers were usually conveyed from the beach between Ship Street and Middle Street by small rowing boats to ships moored in deeper water, but the opening of the Chain Pier in 1823 enabled passengers to disembark directly for the first time. At this time Brighton was the busiest cross-Channel port in England, and was on the quickest route between London and Paris as overland speeds were roughly the same as those at sea. Facilities were never as good as a natural harbour though, and in 1825 steam-packets started running from Newhaven, and from Shoreham in 1826. The opening of the railway to Newhaven on 8 December 1847, and the construction of ships for the Newhaven route by the London, Brighton and South Coast Railway Company, then sealed the fate of passenger traffic from Brighton.
A small revival between the wars came in the form of cross-Channel day-trips from the two piers, while Sussex coastal steamers continued to operate until about 1960. A jet hydrofoil service, the 110-ton Boeing Flying Princess, operated from Brighton Marina to Dieppe from 27 April 1979 until it was forced to close on 29 August 1980. Travelling at up to fifty knots, the ‘Seajet’ reduced the journey time to just two hours but was greatly affected by bad weather.