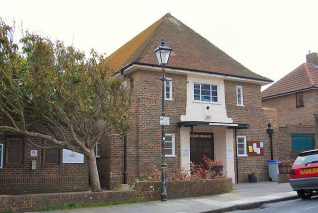 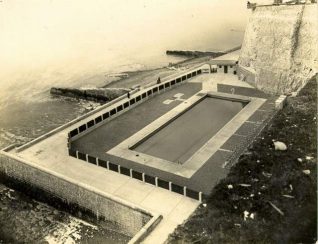 zoom
Rottingdean Swimming Pool, c. 1935: Aerial view of Rottingdean Swimming Pool. This opened on 29 July 1935 to replace bathing facilities lost when the sea wall and Under cliff walk were built. It was a seawater pool and measured 100 feet by 35 feet. It was filled in with concrete in 1994.
Image reproduced with kind permission from Brighton and Hove in Pictures by Brighton and Hove City Council 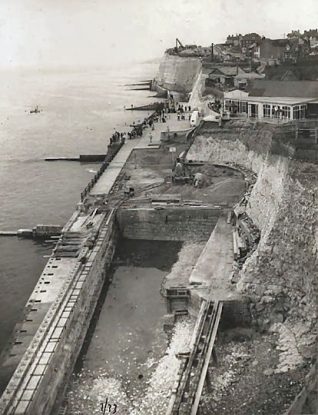 zoom
This photographic print was made by the Borough Surveyor's department in July 1932. It is a view west of Rottingdean seafront. Construction work on the Rottingdean bathing pool can be seen in the bottom half of the photograph. The photograph was taken as part of a series recording work on improving sea defences in the area between Rottingdean and Saltdean. Designed by the Borough Engineer, David Edwards, these defences became part of the Undercliff Walk that runs east from Black Rock.
Reproduced courtesy of Royal Pavilion & Museums, Brighton & Hove

The village has two community centres. The Whiteway Centre, Whiteway Lane, was opened in April 1974. The other, Rottingdean Public Hall in Park Road, was built in 1935. The corporation’s Rottingdean Library opened in December 1929 at the Church of England School on the southern side of Nevill Road. In about 1948 it moved to a house in Marine Drive between Park Road and West Street, but in 1953 the corporation purchased The Grange on the eastern side of the Green and opened it as a branch library on 29 January 1954.
Rottingdean swimming-pool was opened by the mayor, Edward Denne, on 29 July 1935 in conjunction with the Undercliff Walk extension to Saltdean. A sea-water pool 100 feet by 35 feet, it had few facilities but occupied a wonderful location below the cliffs. In 1989 it was privately leased but damage in the storms of January and February 1990 have probably caused its permanent closure. On the eastern cliff top, behind the fence above the pool, lies the Hangman’s Stone, named after the sheep-stealer who, after falling asleep at this point, was strangled by the lead he had attached to his booty.