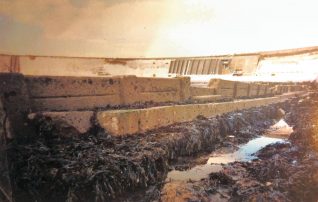 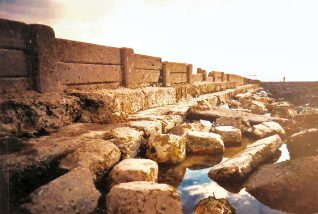 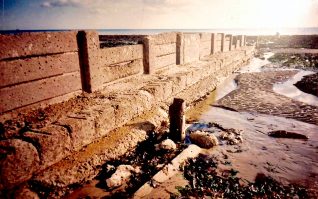 The Undercliff has seen a few changes over the generations.  Some have been sudden and relatively quick, such as the initial Undercliff Walk construction of 1928-1935, and the recent major rebuild we enjoy today. There has been other, less dramatic and more gradual change.

These photos taken in 2003 show the wonderful inter-tidal stretch of coast off Ovingdean Gap. The two groynes are the sole survivors of nineteen that once stood between Roedean and Saltdean.  Dating from 1906-1911, these pre-date the Undercliff Walk itself, and had in fact been the first reinforced concrete groynes in England. I think it is incredible these sections have withstood the sea for a century.

Over the years, they’ve been handy to sit on, or sit against, for a sunbathe.  Since childhood not only have they been fun to walk along, but have provided relatively easy access to the sea at the very lowest of tides for a paddle and some rewarding “rockpooling”.  Excellent views of the coast, too, have been possible from them. Now in rapid deterioration, these century-old walls will eventually disappear, perhaps sooner rather than later … who knows?

Did you ever go ‘rockpooling’? Please share your memories by posting below.