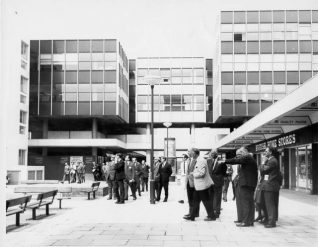 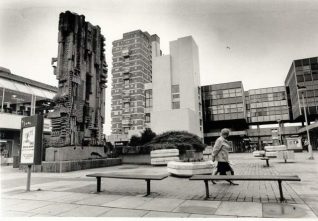 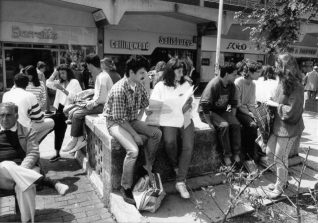 zoom
Since the 1980s, increasing numbers of European teenagers have come to Brighton and Hove to improve their knowledge of English language and culture, attending language schools and staying with local families. Churchill Square is a convenient meeting place in central Brighton, as it is served by most buses from suburban Brighton and Hove. Photograph Copyright Evening Argus.
Image reproduced with kind permission from Brighton and Hove in Pictures by Brighton and Hove City Council

A new shopping and entertainment heart for the town was first conceived in 1935, and the dilapidated buildings of Blucher Place and Upper Russell Street were cleared in 1938; the war prevented any further progress, however, and the vacant site was used largely used as a car-park. Further clearances followed at Artillery Street, Cannon Street and Russell Street in 1957-8.

In 1959 the council decided to redevelop the whole site for shopping and entertainment. Following a public inquiry, ministerial approval was given in January 1963 for a fifteen-acre redevelopment from Western Road to King’s Road, including the Kingswest and Brighton Centre sites but excluding the Grand Hotel which the council had hoped to include. The Top Rank Centre (Kingswest) and the Russell car-park were the first of the new developments to open, and in 1965 work on the main part of the site, Churchill Square, commenced. The first shop of the development, Blackburns menswear, opened in June 1967 but the rest of the sixty-one shops of this phase, on one level only and including two supermarkets, did not open until the autumn of 1968. Churchill Square was formally opened, at a cost of £9 million, by mayor Thomas Taylor on 11 October 1968. The additional multi-level development to the south of the main square opened in late 1971 and 1972.

The complete precinct has some seventy shop premises, and there are 105,000 square feet of offices for British Telecom and the south-eastern headquarters of the Post Office. The offices are known as Grenville House and the underground service road is known as Grenville Street, both reminders of the early-nineteenth-century, cobble-fronted houses of the former Grenville Place which stood on the site. The development also includes Chartwell Court, an eighteen-storey block 298 feet tall completed in 1971 above the Cannon car-park and one of the four modern blocks which unfortunately dominate the sea-front vista. (The original plan had a second block of similar height and a third, thirty-storey, block on the sea-front.) The three multi-storey car-parks, Cannon, Churchill and Russell, provide 1,450 parking spaces; in 1990 construction of a new 572-space car-park was commenced behind the Grand Hotel.

The open area alongside Western Road has become a popular meeting place and street entertainment area, but the whole square and adjacent development, designed by Russell Diplock for contractors Taylor Woodrow, is drab and has dated badly; plans have been made for its improvement. The central square is adorned by a 30-foot concrete sculpture by William Mitchell, the ‘Spirit of Brighton’, which is intended purely as a ‘piece of fun’; it originally had a cascade of water to encourage plant growth, but in reality it epitomises the dreadful concrete redevelopment of Brighton in the 1960s and ’70s. In the adjacent pavement is the square’s inaugural plaque. At the north-eastern corner of Churchill Square, the cul-de-sac Farm Yard is a reminder of more rural days in the eighteenth century when there was indeed a farm yard on the site {18}.

Any numerical cross-references in the text above refer to resources in the Sources and Bibliography section of the Encyclopaedia of Brighton by Tim Carder. The following resource(s) is quoted as a general source for the information above: {123,124}