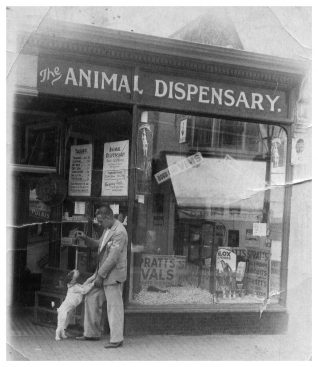 zoom
Dad and canine friend outside the shop. Click on the image to open a large version in a new window. Click on image again to enlarge
From the private collection of Tony Hill

The earliest thing I remember is walking out of Brighton Station with Mum and meeting Dad in his car parked on the station forecourt. I would have been about two and a half years old. I know from them that Mum and I had been to Newcastle–on-Tyne staying with her parents while Dad, who was opening a pet shop, ‘The Animal Dispensary’ at 42 Dyke Road in Brighton, found us somewhere to live.

In those days anyone could call themselves an “Animal Practitioner” and treat sick animals. Most pet shops did this and provided basic care. Dad had three treatments for dogs and cats, worming powder, flea powder and Epsom salts I believe. He also doctored tomcats and put animals to sleep. Anything more complicated he referred to Mr Balfour-Jones, an eminent vet who lived off Davigdor Road, not far from the pet shop.

Dad had previously been a professional guitarist with various British dance bands but decided this was too precarious a career for a family man. Anyone interested in this can find out more from Mike Thomas’s website. You can also see a video of him playing, in Gaucho costume, with Don Sesta’s Latin-American band on the British Pathe website .