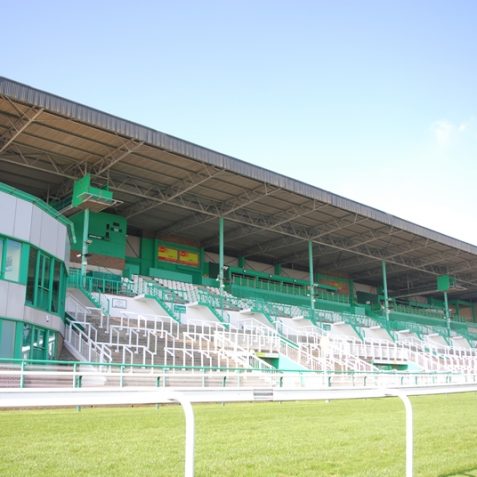 The stand photographed in 2007
Photo by Tony Mould 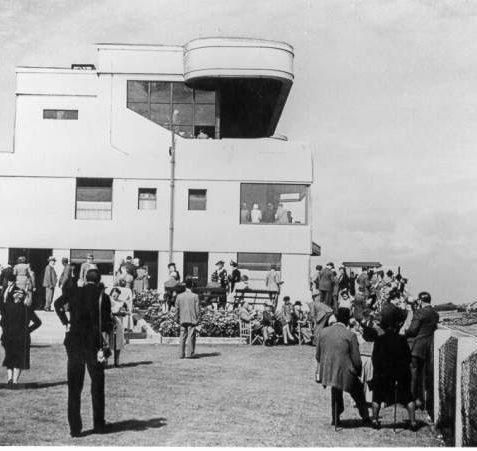 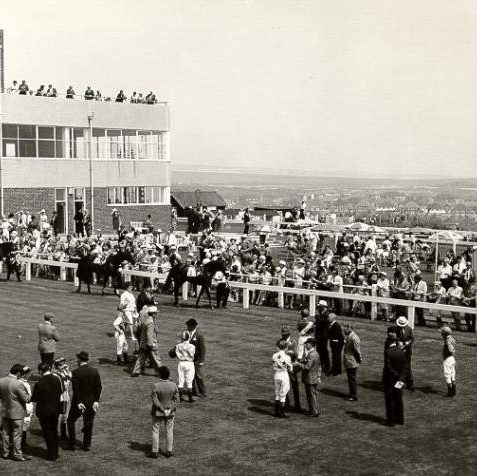 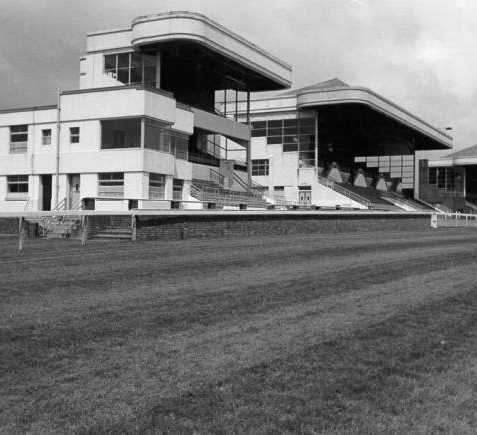 Race Stands at Brighton Racecourse, c. 1960s: These three stands were built between 1934 and 1938. On the left is the Club Stand which was built in Art Deco style by Yates, Cook and Derbyshire of London. All of these stands were removed after a new grandstand opened in May 1965.
Image reproduced with kind permission from Brighton and Hove in Pictures by Brighton and Hove City Council

f) OTHER IMPROVEMENTS and DESCRIPTION: In the 1930s the corporation spent some £60,000 on improvements to the race-course, including the totalisator buildings in 1930, stabling and administrative blocks in 1931, and the subway to Whitehawk in 1936. Several stands were also built, the Tattersall in 1934, two more in 1936, and a new grandstand in 1938. Racing was suspended on the outbreak of war in September 1939 until 24 August 1945, but crowds of 20,000 flocked to the races in the immediate post-war period and large profits allowed many more improvements to be made. In 1951 a new covered stand was added for 1,600 people in the north-western enclosure, followed by another covered stand in the eastern enclosure. The pulling-up ground was laid out in 1952, and the present grandstand, which holds 5,420 people including 1,445 standing, opened in May 1965 at a cost of £400,000; all the other stands, except the 1951 covered stand, were subsequently removed. The first evening races were held in June 1964. Although attendances now average about 2,000, some summer meetings still attract up to 5,000 spectators, and weekend markets and caravan pitches have helped to boost the income of the race-course in recent years. A Country Homes Garden Centre opened in 1990 to the north of the stands.
Brighton is the only race-course in the country owned and operated by a local authority, and is now controlled by the ‘Race-Course Lessees’ of the borough council; in 1990, however, the council decided to lease the course to private enterprise for improvements and the addition of further leisure facilities. The course itself, 1.5 miles long and downhill for much of its length, is exceptionally fast; indeed, the fastest times in the world for three-quarters of a mile and one mile were set at Brighton. The mile record of 1 minute 30.9 seconds (39.6 m.p.h.) was established by ‘Chase the Door’ on 26 July 1990. The race meeting on 31 May 1979 was attended by Queen Elizabeth II. A 1963 plan for housing on the Race Ground was fortunately defeated in the town council.