You are here: HomenextPlacesnextSportsnextGoldstone GroundnextFrom the start to the finish

From the start to the finish 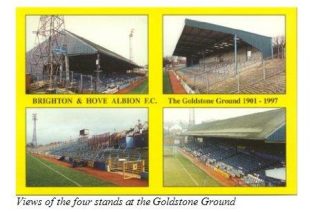 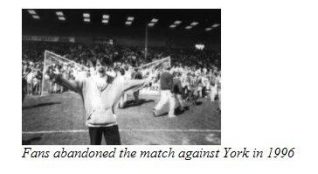 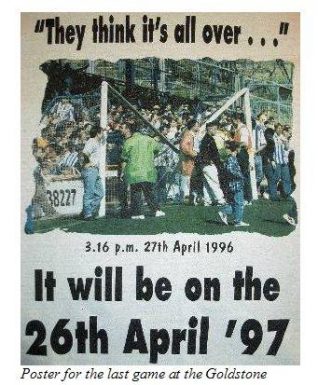 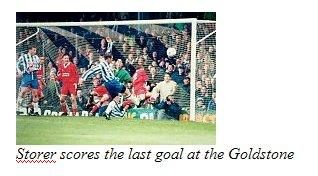 “We will remember the celebrations and tears, the agonies and ecstasies, the joy and the despair. They can take away the fabric, but they can’t take away the memories.” (Tim Carder, Brighton fan)

The Goldstone Ground once stood in a residential area along the Old Shoreham Road, opposite Hove Park. It was home of Brighton and Hove Albion for 95 years before it was demolished for a retail park.

How it started in 1901
At the turn of the century the site was owned by Goldstone Farm and was used for grazing land for cattle. John Clark leased the site from the Stanford estate and offered the ground to the amateur Hove Football Club for the 1901-02 season.

Clark spent £600 on an eight-foot perimeter fence, with turnstiles in the north-west and south-east corners, plus a covered stand for 400 spectators with changing-rooms. In return for a three-year lease, the football club would pay £100 per annum plus 50 per cent of gate receipts over £200 each season.

The first ever football match at the Goldstone was between Hove FC and Clapton on the 7th September 1901. Brighton and Hove Albion were playing at the nearby County Cricket Ground, and as their pitch was unavailable, they approached Hove FC to use the Goldstone and went on to defeat Southampton Wanderers 7-1 in a friendly on the 22nd of February 1902. The Hove FC committee realised that gate money alone was insufficient to pay the rent, so in the summer they approached Albion with a view to sharing the ground. The Albion accepted, and moved from the County Ground in time for the 1902-03 season.

The Albion takes sole charge
At a supporter’s meeting at the Royal Pavilion in April 1904, Hove FC opted for a return to Hove Rec. leaving the Albion to sign a seven-year lease with Alderman Clark as sole tenants of the ground for £250 per year.

The Albion’s board of directors began making improvements to the ground. A wooden stand was purchased and was erected behind the south goal. Stretching the length of the goal-line, it seated 1,800 spectators. To the north of the West Stand were several hundred open-air bench seats. The east banking was also improved and new turnstiles and entrances were built.

First World War
During the First World War, a rifle range was built on the ground. A number of representative rugby union matches were played to generate funds for wartime relief. By the time the war was over, the Goldstone Ground was in a terrible state. A supporters’ meeting at Hove Town Hall carried a motion for renovation “with an enthusiasm that defies description in cold print.” £1,974 was raised. The South Stand was virtually rebuilt, the West Stand was partly re-seated, and the small terraces then existing were remodelled.

A 99 year lease
In 1920 and for cost of £720, the West Stand was extended northward to provide cover for another 300 seats, with new dressing-rooms, offices and a boardroom also installed. The board invested into the Goldstone. In September 1926, after several years of negotiations, Chairman Charles Brown reached agreement with John Clark for the purchase of the remaining five years of his lease from the Stanfords. The club signed a 99-year lease with the Stanford estate, with an option to purchase the freehold outright during the next eight years.

There were two conditions on the sale, though: that no structure on the eastern side would project above the boundary fence, and that no structure could exceed a height of 50 feet. Nevertheless, the purchase of the freehold did proceed in the summer of 1930 when the club obtained a mortgage on the ground and paid the outstanding £5,120 16s. to the Stanford estate.

In 1930 further works were carried out on the West Stand and more terracing was added to the top of the East Bank and behind the north goal. The latter works preceded the construction of the first North Stand, a simple roof covering the rear part of the terrace and about three-quarters of its width. Inaugurated in January 1931, the stand cost £1,325 which was wholly met by the Supporters’ Club over a number of years.

Second World War damage
The Goldstone suffered bomb damage in the summer of 1942 when a German bomb exploded at the western end of the North Stand, severely damaging the roof and girders. The roof had to be removed completely, but it was replaced by the time football returned to normal in 1946. The blast also blew out four windows in the West Stand and covered the pitch with debris.

Post War reconstruction
With ever increasing crowds, the Board decided to announce plans of a £100,000 plan to reconstruct the ground over the following decade. The first phase was the remodelling of the terraces. The southern third of the East Terrace was rebuilt and combined with the “Chicken Run” during 1949 to create a new east enclosure, while new turnstiles and toilets were added all around the ground. The north-west corner was raised to accommodate an extra 2,000 spectators. The terracing of all standing areas was finally achieved in 1953. The old South Stand was lifted onto foundations laid behind new terracing during the summer of 1949, an operation financed by the sale of a promising young Albion player. Five years later, in 1954, the South Stand was completely rebuilt using the new foundations.

During the 1956-57 season the North Stand was extended to the full width of the pitch. The day after, Albion won the Third Division (South) championship in April 1958 the old West Stand was torn down, and the central third — or northern half, as it turned out because of the cost involved — of the present West Stand was erected in its place.

Largest crowd of 36,747
The largest crowd at the Goldstone was on the 27th of December 1958 when second-placed Fulham were beaten 3-0 before a crowd of 36,747. Brighton were now playing in the top flight, and to seat the ever increasing support, a temporary West Stand extension was erected in 1978 and provided 980 seats. The stand was sold to Worthing FC in 1985. In 1986 a family area was opened and a roof was added for the disabled area.

News of the sale
On July the 7th 1995 the Argus ran the headline ‘Seagulls Migrate’ on their front page, reporting on a leaked story that the Goldstone Ground had been sold and the Albion will be ground-sharing with rivals Portsmouth the next season. They also reported that the Board (Archer, Stanley and Bellotti) were planning to build a new ground at Waterhall which would be funded by the profits from a leisure development at Patcham Court Farm. The following day, The Argus revealed that Brighton Council rejected the plans at Patcham Court Farm two weeks previously.

Fans outraged
Fans were outraged that they were not informed by the Board and that the ‘no-profit clause’ was removed from the club’s constitution, meaning the Board would take any money if the club winds up. Fans protested at the televised match at Bournemouth, delaying the game. Protests, aimed at the board, continued into the season.

The most powerful message was on the 27th April at the last scheduled match at the Goldstone against York. At 3:16, fans invaded the pitch from both ends and tore down the cross bars. The match was abandoned and the story made was a global story, with coverage on American and Australian news. Two days later, Chartwell plc. signed a one year lease back on the Goldstone, with only five minutes remaining on the midday deadline.

Many more imaginative protests continued into the next season. Fans protested outside Bill Archer’s house in Lancashire and outside his company, Focus DIY in Blackburn.

Around 90% of the crowd walked out early against Hereford; Brighton and Fulham fans marched from Brighton station to the ground; the Mansfield game was boycotted, with only 800 fans in attendance.

The first ever ‘Fans United day’ took place on 8th February. Fans from around one hundred clubs turned up in their team shirts to protest against the Albion’s board. The day was a great success and Brighton beat Hartlepool 5-0.

The last game
The 26th of April 1997 will be remembered by Brighton fans as the last game at the Goldstone. On an emotional day, Dick Knight was unveiled as the new chairman of the club. Brighton needed a victory for any chance to stay in the league. In the 68th minute of the match, Stuart Storer volleyed into the south goal to send the Brighton fans into ecstasy. As the final whistle went for the very last time, fans grabbed seats, turf and other memorabilia for souvenirs. Brighton managed to stay in the league with a draw away to Hereford.

After ground sharing at Gillingham and renting Withdean athletics stadium, the club’s plans for a new stadium at Falmer, North East Brighton, have been called in for a public inquiry by the Deputy Prime Minister.