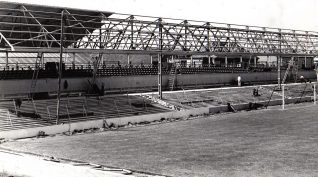 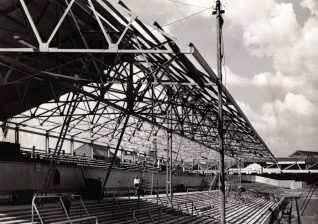 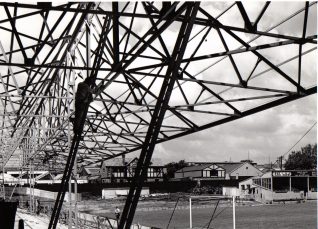 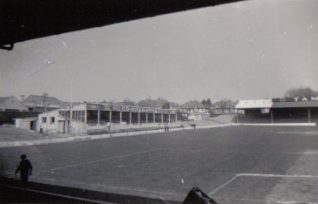 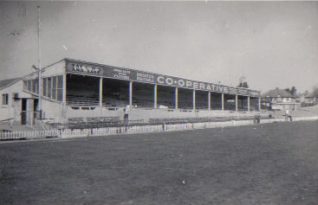 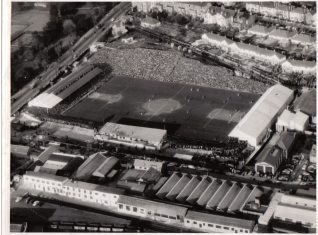 zoom
Image 6: B & H Albion c.1957
From the private collection of Peter Groves 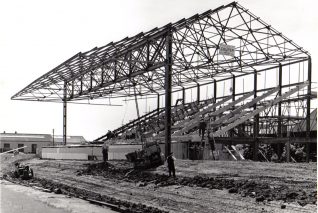 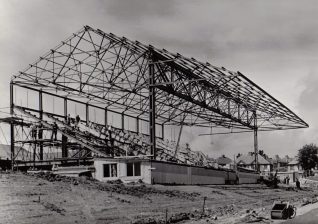 Old photographs
My father-in-law gave me the accompanying photographs, which have not seen the light of day for many years.  Photographs of the early post-war Goldstone Ground seem to be few and far between, these are gems!  Sadly my father-in-law passed away earlier this year but I’m sure he would have liked me to share the photos via this website.

Development dates
Although I can’t confirm the dates but looking at the History of the Goldstone Ground by John Hewitt on this website, they would appear to have been taken between 1954 and 1958.

New South Stand 1954
Images 1 – 3 show the steelwork of the new South Stand under construction in 1954.  It seems that the foundations had been completed in 1949 but the stand was not built until 5 years later.

Image 3 is taken from the south looking west, the old West Stand can be seen in the bottom right corner.

Re-development planning
The complete redevelopment of the Goldstone Ground had been planned as post-war crowds reached record levels.  This was to be carried out in stages over a 10 year period throughout the 1950s.

The Old West Stand
Images 4 and 5 are taken from the newly constructed South Stand looking northwest towards the old West Stand.  The houses in the Old Shoreham Road can be clearly seen.  Also what becomes apparent is the very small capacity and size of the old West Stand.  The advertising of the Co-operative can also easily be seen on the facia of the stand.  Another interesting point is that image 4 shows the extended roof of the North Stand, this work having been carried out 1956-57.

Re-development half complete
Image 6 is a fantastic aerial shot of the Goldstone Ground taken just prior to the redevelopment of the West Stand in 1958.  Albion won the match by a 3 or 4 goal margin.  My father-in-law told me the score and who the opponents were but unfortunately I can’t remember.  The new South Stand has been completed and also the extended roof of the North Stand can be seen, however the old small West Stand is waiting for redevelopment. Interesting points to note are:

New West Stand 1958
Images 7 and 8 show the steel work of the new West Stand under construction in 1958.  Image 7 is taken looking south and 8 is looking north.  It almost looks as if the new stand was built partially on top of the old stand, the white timber building seen below the steel work.

Into the 1960s
Although other development plans for the Goldstone Ground went ahead, such as floodlighting, there was a further plan to develop a massive office block behind the West Stand to run the whole length of Newtown Road.  This was a real grandiose plan, way ahead of its time.  Unfortunately the full plan was not implemented and the staff had to make do with the smaller office and management facilities under the West Stand.