You are here: HomenextPlacesnextSportsnextHollingbury Park & Golf Clubnext10 - 1934 - 1938 Modernisation of the golf course and extension of the clubhouse 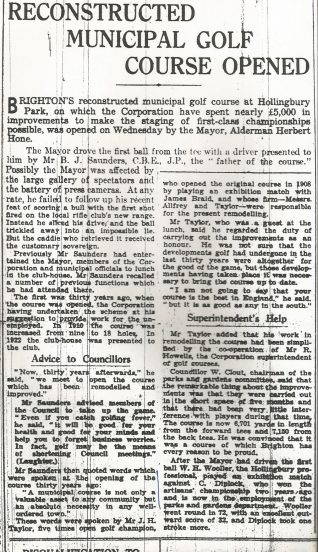 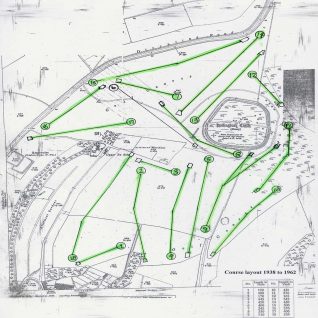 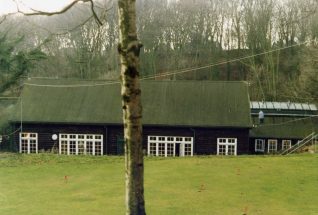 zoom
View of the 1936 extension to the clubhouse that housed the club bar and snooker room.
Private collection of John Knight 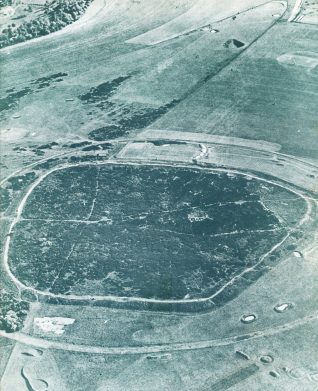 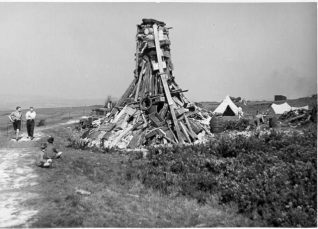 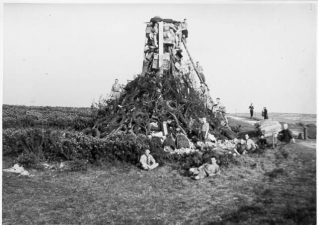 The old Queen Mary workshop was being found inadequate for the increasing use of the golf course. In 1934 the Corporation advised the Club that building a Clubhouse was out of the question – Benjamin Saunders suggested no objection would be made to building an extension. Club members raised £600 through a Bond issue. The extension opened on January 19th, 1935 – I doubt it was expected to serve the club for over 50 years.

In 1936 the Council Sports Sub-committee were considering improvements to the golf course, the objective being to modernise the course in line with the effect on the game due to improvements in equipment. The plan would increase the length of the course to a championship standard in anticipation of hosting the News Chronicle a major professional tournament and possibly other important events.  The proposal included a new clubhouse at an estimated cost of £12,000 to give the ‘finest course in the neighborhood the finest clubhouse’.

Plans fell by the wayside

The sports pitches known as the 40-acre field, roughly the middle-south side of today’s course below the clubhouse, were incorporated into the golf course. (See maps of course layouts and pre 1937 view of Camp) With the assistance of the Corporation Superintendent Mr R Howells, the improvements were carried out in just 5 months. The proposed new clubhouse fell by the wayside and it would be over 50 years before it would be built!  However, the Council spent £5,000 on improvements to the course having the course completely re-designed by the famous company of golf course architects Hawtree & Taylor. They were great supporters of municipal golf. Hawtree believed that golf should be available to all and even more importantly that “manners matter, money does not”.

Threat to disband the club

In 1937 the club was prospering with over 200 members. The club formed a new Sub-Committee to make recommendations to the Council for better management of the course, expecting to consolidate the position of the club when the new course and clubhouse were built the Club was shocked at the response – they voted to disband the Club. Many on the Council clearly thought the club had got too big for its boots. The Club Captain, Harold Ridge, wrote to the Council pointing out the ingratitude of the Council of the contribution the club made to the running of the course. It seemed to work as by August 1938 the Council Sports Committee recommended the limit could be increased 350.

In April 1938, attended by J H Taylor, The Mayor, Alderman Herbert Hone, made the opening drive with a driver presented to him by Benjamin Saunders. He sliced his opening drive into an impossible lie and duly paid the caddie that retrieved the ball the customary sovereign. The Hollingbury professional Bill Wooler played an exhibition match against Colin Diplock the former artisans champion.  The former winning by a single shot scoring 72.  Bill Wooler passed away in 1944, as a mark of respect and appreciation the club purchased a trophy that carries his name today. The prospect of hosting the News Chronicle Professional Tournament was put on hold (along with all club competitions) through the course of the war.

This looks to be the work of the Scouts to celebrate the Silver Jubilee of King George V and Queen Mary 1935 – The Camp provided an ideal site for a beacon bonfire, due to its prominence  with clear views of Cissbury Ring to the West and Mount Caburn to the East