You are here: HomenextPlacesnextSportsnextHollingbury Park & Golf Clubnext14 - 1962 Alterations to the course and developments in the club. The Southern PGA Championship.

14 - 1962 Alterations to the course and developments in the club. The Southern PGA Championship. 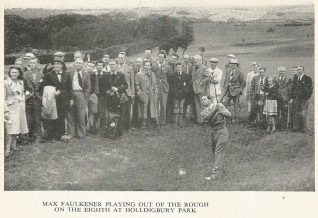 zoom
1964 Max Faulkner playing the 8th hole from the ditch at the side of the Camp.
HPGC Archive 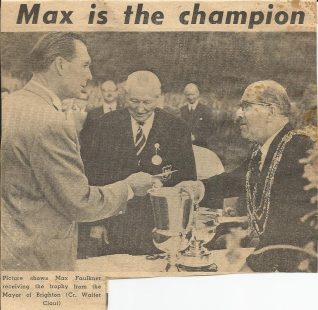 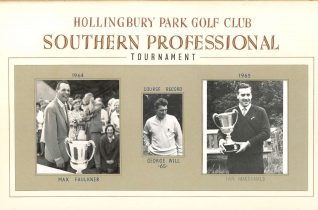 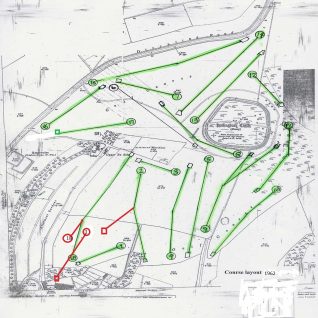 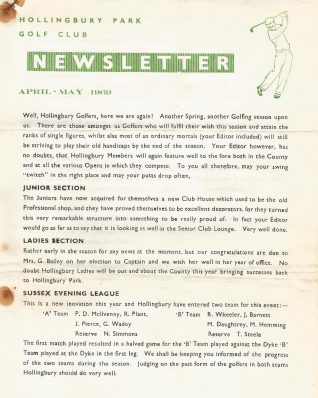 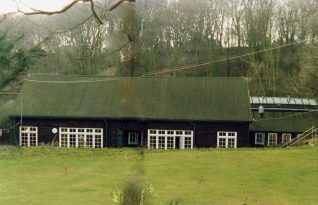 zoom
The putting green behind the 'Old' clubhouse.
Private collection of John Knight

In 1961 the Club took over full responsibility for managing the bar and catering from the Corporation, this entailed responsibility for employing the Steward and Catering staff. The load on the ‘Hon Sec’ had grown heavily by 1963 to such an extent that a full time Secretary was employed, a Mr Rowe, affectionately known as ‘Digger’ he ran the club for many years.  The Committee were very concerned over the number of dog walkers, walkers, children, picnickers and non-paying golfers that were using the course, they suggested that everyone would benefit if a Ranger was employed to control the course, they even offered to pay a part of the wages, the Parks Department own security staff took on the responsibility, it didn’t last long.

1962 Alterations to the course.

Due to public incursions on the course further alterations were made to the course in 1962, (some imagination and reference to earlier course layouts required!) What is now the 2nd hole was a practice hole used by the professional for teaching, this became the 1st hole and the blind par 3 to the valley was closed, as was the 2nd tee above it on the other side of the valley, the green can still be clearly identified as can the footprint of the 1st tee and 18th green.  – Changes shown in red on course plan. The scrub around the old 1st green is kept clear by the admirable Friends of Hollingbury & Burstead Woods (http://www.fhbw.org.uk/) to encourage natural flora and butterflies. A little exploration up the hill into the woods will reveal the old 2nd tees in the scrub & trees that have grown up above the old green. The 18th hole was shortened by about 100 yards (now the 1st hole) and moved to the current site, the original green must have been the largest in Sussex (see News Chronicle pictures) much of the turf was used to lay the putting green behind the clubhouse.

In the same year a sub-committee was formed to look into forming a Junior Section, it was successful by 1967-68 the section was formed, the Captain, Paddy McIlvenny thanked Ron Wilson for his help in getting the section underway a very keen and enterprising crowd they must have been judged by the 1969 Newsletter.  In 1968 of the 319 members, 249 were men, 49 women and were 21 juniors. The course and club proved a good training ground for young golfers as the section produced some of the Counties finest golfers. Two juniors went on to Captain the County, one winning the Sussex Open Championship and a number became professional golfers.  The Club continued to perform well at County level members gaining selection for the County.  Members entering the Sussex Amateur Championship did well as they won the Team Championship with Joe Pearce beating George Wadey in the final of the Plate

held their Championship at Hollingbury.  The Club played a large part in making the day, even paying the premium on insuring against the £1,000 on offer for a hole in one! Former Open Champion Max Faulkner won the Championship – it must have been a success as it returned in 1965.

The clubhouse shows its age

The club room and bar were showing their age (as was the club house) and were in desperate need of renovation, an appeal to the Council met with the usual response and members had to dig in their own pockets and do the job themselves.  There was a grand opening of the bar in February 1967.  The two shelters on the course had also fallen into disrepair and a suggestion was made at the AGM that if the Council couldn’t afford to do it then perhaps the Club could. A deal was struck with the Parks and Gardens Department that the Club would build one shelter and the Corporation replace the other. The aforementioned Paddy Mcllvenny, a very fine golfer, Club Champion as well as Club Captain, built the brick shelter that stands by the cinder path beside the 12th fairway at his own expense, unfortunately the Council shelter to replace the one at the back of the 8th green has yet to get off the ground!

Thanks to Tom Bailey for his history of HPGC for much of the foregoing information.