You are here: HomenextPlacesnextSportsnextKing Alfred CentrenextTeenage memories from the 1960s

Teenage memories from the 1960s 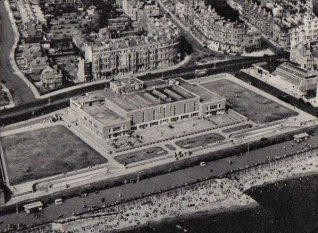 In the 1960’s, myself, my younger brother Tim, and my next door neighbour Eddie Benton, spent most of our summer holidays on the beach by the King Alfred swimming pool. Our favourite beaches were between the bottom of Hove Street, and the Medina Groyne. Initially we went with family, but as we grew into our teens we were allowed to go on our own.

A warren of corridors
The number 19 bus from Hangleton dropped us at the top of Hove Street, it was then a 5 minute walk to the beach. Long hot summer days were spent playing, both in the water and the surrounding area. If we became bored with the beach, we would play on the sun terrace in front of the King Alfred complex. This terrace area is now where the newer pool, built in the 1980’s, stands. Below the sun terrace, was the underground car park, which was also a favourite place to play. There was a warren of corridors linking the car park to the pool and the nearby bowling alley. These corridors became “secret passages” as we played James Bond, Dr Who, Batman or whoever was most popular at the time. No damage was done, it was just mischievous play!

The King Alfred complex was completed in 1939, and immediately requisitioned by the RNVR at the outbreak of World War II, it was then used as a training facility. With few cars around at that time, it was surprising that there had been the forethought to build an underground car park. Even in the 1960’s few cars seemed to park there, were the planners really anticipating what would happen by the end of the century?

On the beach
All three of us learnt to swim on the beach by the King Alfred. At low tide, by using the assistance of small waves in shallow water, my brother Tim, although the youngest, was the first to swim. Myself and Eddie, followed soon after.

Fishing was another popular summer pastime. Depending on the tide time, we would catch a train out to Lancing to dig bait, then back to Hove for an afternoon of fishing off the Medina Groyne. Occasionally, if tide time dictated, we were allowed to stay late into the night. Eddie’s father, who had a car, would come down to collect us.

Saturday afternoons
Throughout the year, every Saturday afternoon was spent in the King Alfred swimming pool. The Major Pool was open during summer months only. This pool was 33 yards long and was 10 feet deep at the deep end, where there were 4 diving boards. The diving boards opened for one hour on a Saturday afternoon, with the deep end being cordoned off for divers only. After what seemed like hours of indecision I was the first off the high board. Eddie and Tim followed soon afterwards, encouraged by my success. During the winter months the Major Pool closed and the Minor Pool opened. This was a smaller pool adjacent to the main pool, with changing rooms deep down in the basement. There was no time limit set by the attendants, and we stayed in the pool all afternoon, usually the last out as they closed!

Homeward bound
On the walk back up Hove Street to the bus stop on the corner of Sackville Road, we always stopped at the shop for a bag of Smiths crisps. There was only one flavour, plain, with the salt wrapped in a small blue bag. The next stop was the Fire Station half way up Hove Street, to watch the firemen training, before the return journey to Hangleton on the number 19 bus!