You are here: HomenextPlacesnextSportsnextWithdean StadiumnextDeveloped as a tennis centre in 1936

Developed as a tennis centre in 1936 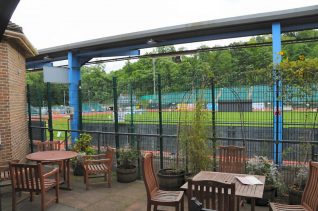 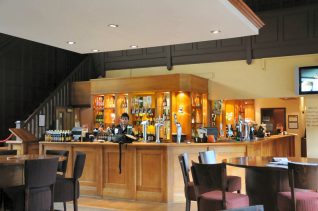 Brighton’s premier sporting venue occupies the site of the Marshall’s Playing Fields which were used for many years by Brighton Technical College. The stadium was originally developed as a tennis centre by the Lawn Tennis Association. The centre court was laid out between an open seating area and the grandstand, which had room for over 2,000 spectators. Beyond this were many other tennis-courts, and the development also included four squash-courts and a small zoo {123}. Opening in 1936, it was recognised as the finest tennis centre outside Wimbledon and was set to host the South of England Championships until the war intervened. The Davis Cup match between Great Britain and New Zealand was held at Withdean in the spring of 1939.
During the war the stadium was used as a mortuary, but on 22 May 1947 it was relaunched as the Brighton Olympic Stadium, still principally concerned with tennis but with the zoo expanded and a miniature railway installed. However, this venture proved to be unprofitable and closed in 1952. Brighton Council opted to convert the stadium into an athletics arena at a cost of £28,000, and on 14 May 1955 the mayor, Walter Dudeney, formally opened the Brighton Sports Arena; floodlights were added in August 1956. The stadium has now played host to numerous different events and sports including athletics, circuses, floodlit cricket, regular horse shows until 1962, scout jamborees, displays, and football (association, rugby and American). In October 1962 an England athletics international was held there.
Withdean Stadium covers an area of 15.15 acres and has its own public house, the Withdean Sportsman, which is owned by the corporation. The grandstand is now unfortunately dilapidated but the words ‘Withdean Zoo’ may still just be made out on the facade. Extra squash-courts were added in the 1970s, and on 20 September 1980 Olympic champion Steve Ovett inaugurated an all-weather running track. On 1 April 1988 an indoor tennis centre was opened which it is hoped will make Withdean a major centre for the sport once more; several outdoor courts have also been added. The record attendance for any event at the stadium was established on 8 December 1985 when 12,000 people saw an American football match between the Brighton B52s and the City College of San Francisco.