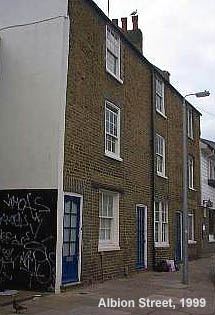 “Thomas Packham, my great great grandfather, was living at 7 Albion Street in 1839 when it was a drayman’s store belonging to Tamplin’s brewery. He had arrived some ten years earlier from Lewes with a sack on his back and eleven pence in his pocket, hoping to make a better living in Brighton. He was an ostler by trade; so ‘being good with horses’ he probably found work with the brewery while his wife Mary took in washing, the staple back street Brighton industry of that time.

By 1851 the family had moved to Number 4 Albion Street which still exists; and Thomas would doubtless have been astonished to learn that the house next door was up for sale recently for nearly £74,000 and described as ‘a charming Victorian terraced two bedroom house with small patio’. Thomas would have known the patio as a backyard where his wife hung out the washing and laboured over the tub on sunny days. The rest of the washing would have been strung across the street.”