You are here: HomenextPlacesnextStreetsnextAmberley DrivenextMemories of the 1950s and 1960s 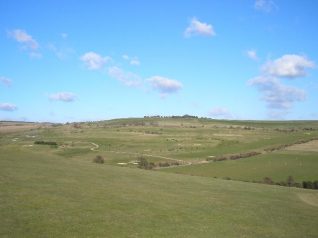 zoom
The track of the old Dyke Railway, the South Downs north of Hangleton
From the private collection of Peter Groves 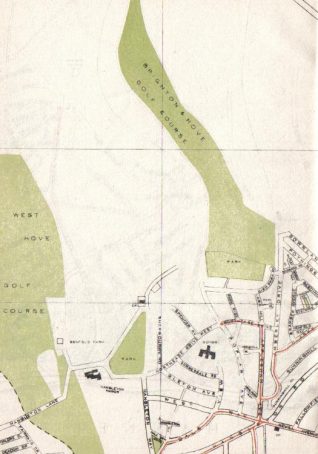 zoom
Hangleton ca. 1950
From the private collection of Peter Groves 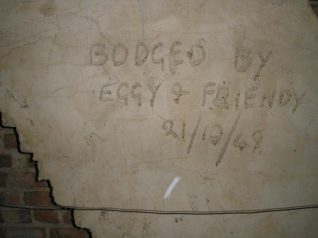 zoom
Builder's mark in the loft of my mother's house in Amberley Drive.
From the private collection of Peter Groves 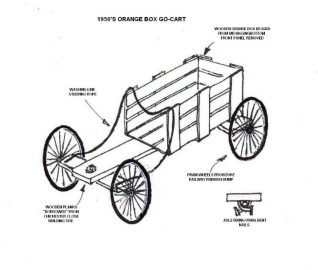 I grew up in West Blatchington during the 1950s, & 60s and know the area well. Of course it’s changed enormously since moving to Amberley Drive in 1957, aged 3 years, with my mother, brother and sister. Strictly speaking, although really in the parish of West Blatchington, everyone refers to the area as Hangleton.

Post War growth of Hangleton
Without doing too much research, I recall that the north of Hangleton was developed by Hove Council due to the urgent requirement of housing during the post-war years. Its rumoured that the council houses were “Jerry Built” by ex-German POWs following the war. I’m not sure how much truth there is in this and certainly the chimney breast in the loft at my mother’s house was plastered by an English “spread” as he left his name and the year ‘1949’ marked into the drying cement.

Early memories
Early memories of the late 50s are vague although I do recall that Chichester Close was just under development. Down the road from Chichester Close, St. Helen’s Church was just a short walk away. On the way to play around the church we passed the Downsman Public House and horses in the adjacent field. Below the Downsman were old broken down farm buildings on the right hand side where the parade of shops now stand. This was once the site of a medieval village. I believe there was also a dairy close by.

Two places to play in this area were the old concrete gun emplacement directly behind the church and the massive old oak tree at the entrance to the church. The oak tree is long gone; I wonder what happened to the gun emplacement? It was a large underground construction, is it now under someone’s back garden? I suspect that it had been built in the 1930s, with the war looming, to protect the Dyke Railway. With the Dyke Railway closure in 1938, I doubt that it was ever used in anger! From St Helen’s open downland stretched across towards Mile Oak, Hangleton Valley, undeveloped.

Hangleton Park was also a favourite place to play; it was twice the size of the current park, stretching further northwards to meet Hardwick Road and Harmsworth Crescent – also undeveloped. Even well into the 1960s there was a “Parkie” to police the park. He had his own black painted wooden park hut just by the Lark Hill entrance.

With no supermarkets at that time, the small parade of shops close by in Burwash Road, sold all that was necessary. First was Charlie Bullen’s newsagent, tobacconist & confectionist. Of course the majority of adults smoked in those days and I remember the cigarette stand was a mass of thousands of packets, hundreds of brands! Next was the chemist shop, then Mr Carder’s grocery shop, a wool shop and then the butchers. Last was a greengrocer, Mr Higgingbottom – the name seemed so funny to young children!  Another vague memory from the late 50s was the regular testing of the air raid siren, perhaps once a quarter. The sound came from the Grenadier area but I never found out exactly where it was?

Summer play
Without doubt, the Downs was the most popular place in the summer. Few people had TVs and, anyway, programmes didn’t start until teatime. With older children, a group would go to Foxes Hollow to pick blackberries. Mum would then make apple and blackberry pie and lots of jam that would last long into the winter.

During hours and hours of play on the Downs, older children would sometimes tease the younger ones with stories of The Green Man, who carried a sack to put children in. A shout of “the green man” would have children running to hide in the tall barley fields. I don’t remember if I really believed it, but I liked the excitement of running to hide.

The old Dyke Railway track was also popular; but, believe it or not, in the late 50s it was used as a landfill site. Enormous holes were dug, filled with rubbish, and covered over. Discarded old prams were a much sought-after find. The wheels were used in the construction of a go-cart, with the chassis made from orange boxes begged from Mr Higgingbottom. Another memory from the Dyke Railway landfill site was finding old wooden roadblocks which were oak blocks, approximately the size of a brick, with tar from the road still stuck to one side. We took them home for the fire, however I don’t think mum was too pleased. They smelt as they burnt, but gave off plenty of heat and lasted for ages.

Very few cars in those days
Cars in Amberley Drive were virtually non-existent and street football was another favourite game, which we would play for hours. Occasionally we would go down to the green at Amberley Close to play football. The old roman villa was directly underneath the Green but we thought little of the Romans who had been there nearly two thousand years before us! Lots of other street games were played: hide and seek, British bulldogs, knock-down-ginger, hop-scotch and marbles – to name but a few. The warm summer evenings seemed to last for ever and ever as we played. Occasionally in the evening a group of us would walk down to the Grenadier Fish & Chip shop, for 6d (2.5p) of chips. The chip shop was where Barclays Bank now stands.

Street vendors and traders
Few people had freezers, so a very popular street vendor for children was the ice cream man, Mr Softie. He announced his arrival with the tune of ‘Greensleeves’. There were other street vendors who ventured into the area, selling from vans. The baker who called once a week at a set time. The fishmonger came on a Thursday when he shouted out loud to let the housewives know he was in the area. I could never understand what he said. And of course the rag-and-bone man who also had a strange sound to announce his arrival. The Corona (fizzy pop) delivery man also called once a week and was very popular with children: fizzy pop was a luxury.

Winter Time
The council houses in the north of Hangleton were bloody cold in the winter. None more so than my Mum’s which faced the Downs. Cavity wall and loft insulation were unheard of, and heating was almost non-existent. We had an open coal fire in the front room and a coke boiler in the dining room, which also heated the hot water. It was meant to heat a radiator on the landing as well, but it rarely worked. Winter mornings were bitter, Mum tried to keep the boiler going all night but it rarely lasted through.

The winter of 1962/63 was the coldest I can remember, I believe it snowed just after Christmas Day 1962. By the time it stopped, the snow was so deep Hangleton was pretty much cut-off from Central Hove. In Downland Drive, which faced north and towards the Downs, the drifts were many feet high. We burrowed tunnels into the drifts and made vast caverns beneath them.

The snow was so deep the buses which normally terminated in the north of Hangleton, stopped a mile away, by the Neville School, unable to make it up the steep hills. We would walk down to the bus, and I clearly remember that for weeks afterwards narrow paths had been cut through the drifts with the snow piled up high above my head on either side.

Night times were bitterly cold with little heating in the house. Extra blankets were used and even pullovers and socks left on in bed. We had a paraffin heater that would be placed in the bathroom prior to bath-time just to take the chill off. In the morning the inside of the windows were frozen, with net curtains stuck to the ice. The paraffin heater would be moved downstairs in the morning before breakfast, and then Mum would get the boiler going.

Although it was a bitterly cold winter, I don’t remember it being particularly unpleasant, for children there were piles of snow to play with! We built igloos, snowmen and rolled giant snowballs 5 or 6 feet in diameter and of course there were lots of fast slippery slides on the steep slopes of Hangleton!