My location
Get Directions
Mother’s problems with the neighbours

I spent the first 30 years of my life in Amberley Drive, and lived at 114 where I was born, then 52 for several years and finally 46. For some obscure reason my mother could never get on with her neighbours, so we were constantly on the move. The chemist shop in Burwash Road was run by Mr Leslie Brayton, a thin, bald headed bespectacled man who was never in the front of the shop when you entered. He would be occupied in the back and would peer at you through a spy hole in the partition wall, and would shuffle through to deal with you shortly afterwards. 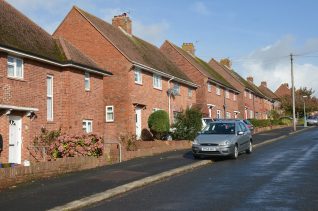 Number 52 Amberley Drive is second from the left: click on the photograph to open a large version in a new window

The butcher’s shop was named Baldock’s, and run by two youngish men who looked very much alike and I guess they were brothers and a blonde lady with glasses, presumably the wife of one of them. Many is the time I was dispatched to Baldock’s on Saturday morning to buy a whole leg of lamb for 15 shillings. The fish and chip shop at the Grenadier was known as ‘Hangleton Fisheries’ and was run by a Scottish chap and his wife, and as I recall they were constantly at one another’s throats.

There were two other mobile ice cream vendors worthy of a mention and who gave Messrs Softee and Whippy a run for their money; Nielsons was one, and the salesman was a bald headed guy called Jock. I remember the ‘Canada Bars’ he sold were to die for. The other was a one man band, an Italian chap named Sid who drove a plain cream coloured Ford van with a high back on it. No fancy jingle for Sid! He would drive up the road tooting his horn and yell out the window “Ice cream, ice lollies, choc ices”, but this was done in his strong Italian accent and sounded more like “I-dip, I-lolly, choc I-dip”. It took me several years to fathom out what he was actually saying; his cider apple lollies were superb though.

I also remember Charlie the greengrocer in his old grey lorry, a real ladies man as I recall, forever chatting my mother up he was. The guy who delivered repaired shoes was Johnny, he rode a BSA Golden Flash with a sidecar, and for a number of glorious Saturday mornings I rode pillion with him and assisted him with his deliveries. Crash helmet? Unheard of. I also charmed my way into the passenger seat of Mr Kelly the fishmonger’s Morris Minor van, and would run back and forth to his customers’ houses with dubious looking packages of smelly wet fish, straight into the bath when I was dropped off home. I never did decipher what he used to yell out of the window to ply his trade, and I never had the nerve to ask.

The joys of ‘Jamboree’ bags

Finally, does anybody else remember ‘Stones’, the family in Northease Drive who ran a general store from the garage adjoined to their house? I think all things considered, Herbert, the old fella who owned it, did better out of me and my pals than Bullen’s in Burwash Road. He sold Jamboree Bags you see, 3d. a time and the novelty gift you got along with the two sickly toffees and handful of dolly mixtures was irresistible to us. I also remember people trudging up his driveway clutching an empty bottle to buy vinegar that was drawn from a wooden barrel sitting on the garage floor. Herbert was ably assisted in the store by his wife and daughter and although they were always courteous I cannot ever recall seeing any one of them smile.

When I lived in Hangleton (12)