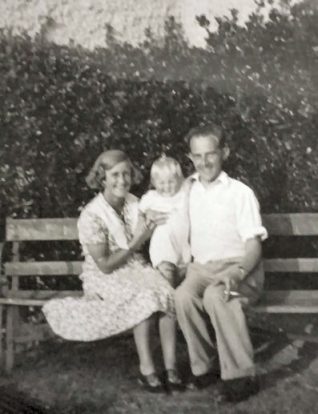 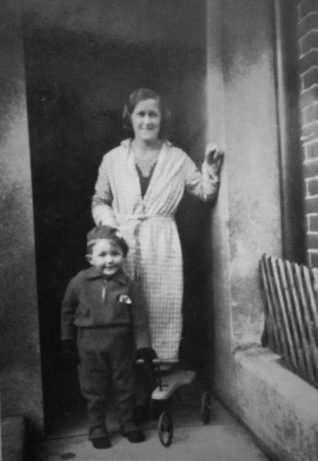 I was born on the 22nd of June 1933 in the Sussex Maternity Hospital. At this time my Mum and Dad were living in 35 Bennett Rd, Kemp Town. My earliest memory is of being pushed in my pram across a corrugated paved area near the shop which was at the ‘top end’ of our road. At my age now, my memory of our family home is rather vague, but photographs taken by my dad have helped me to recollect it a little better.

On entering the front door there was a narrow hallway, on the left hand side was a staircase leading up to the upper floor which contained two bedrooms. The window of the rear bedroom overlooked the small back garden. Downstairs under the staircase was the ‘coal hole’ cupboard. The coal-man had to hump the sacks of coal through the front door, and empty them into this cupboard. When war was imminent, this cupboard was cleaned out and made into a ‘bomb shelter’. We had blankets and cushions and it was just big enough for the three of us to squeeze in there.

A visit from the chimney sweep

A few steps further along the passage on the right was a door into the sitting room; it had a lino floor with rugs scattered here and there and an open fireplace. When we had our chimney swept, all sorts of dust sheets had to cover the furniture, whilst the sweep assembled the numerous cane rods together with the stiff circular brush at the top. This contraption was thrust up the chimney gradually; eventually I would go outside to see the brush showing out of the chimney pot. If chimneys were not swept  they would often catch fire, resulting in a dramatic expulsion of black smoke into the street.

I do remember the gas lights and recall watching my dad replacing the burnt out mantles from time to time. These were small flimsy soft little bags, which, when filled with the gas and lit, puffed up magically into about a golf ball size of rigid glowing light. The kitchen was nearby; I can recall the gas cooker which was a monster made of black cast iron.

Helping Mum with the laundry

Close by the kitchen was the laundry; this had a stone floor, a boiler and a mangle which was another cast iron monster. I remember I used to help my mum with the laundry by turning the handle on the mangle. Of course there was no bathroom; baths were taken in a galvanized tin bath filled with kettles of boiling water. There was a rather simple wooden back door which led out to the garden. To the left was the toilet with its wooden seat and high level chain pull cistern, cast iron of course. There was a nail in the wall on which to hang the ‘toilet paper’; in fact this was newspaper, torn into suitable squares.