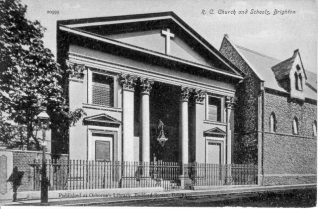 zoom
The Church of St John the Baptist on Bristol Road. When consecrated on 9 July 1835 it was only the fourth Roman Catholic church to be built in England since the Reformation. Inside lies the tomb, designed by John Carew, of Maria Fitzherbert who was buried here on 6 April 1837. Next to the church is St. Joseph's Convent of Mercy, which is now a home for older people run by the Sisters of Mercy.
Image reproduced with kind permission from Brighton and Hove in Pictures by Brighton and Hove City Council

On the northern side of Bristol Road stands the Roman Catholic Church of St John the Baptist. Consecrated on 9 July 1835, it replaced a small chapel in High Street, and was only the fourth Catholic church to be erected in England since the Reformation. Built and probably designed by William Hallett, the Corinthian-style church was altered in 1866, 1875 and 1888, and in 1890 became the first Catholic church in England to have electric lighting installed. It was completely redecorated in 1976 when the Calvary Chapel was converted into a porch on the western side, and is now a listed building. The interior contains the tomb, by John Carew, of Maria Fitzherbert who was buried there on 6 April 1837.
Adjacent to the church is St Joseph’s Convent of Mercy, now a listed building used as an old people’s home by the Sisters of Mercy. Founded in June 1852 at Egremont Place, the convent moved initially to a house opposite the church and then in 1858 to the adjacent Bristol Lodge, a yellow-brick  house of about 1835. A cell block and refectory were added in 1864-6 by Charles Buckler around an internal courtyard, and the convent was physically linked to the church. The convent chapel was also added by Buckler in 1892.
Marine Terrace Mews, entered through an archway off Bristol Road, dates from the 1820s when it serviced Marine Terrace, now 84-89 Marine Parade. A group of contemporary, cobble-fronted mews cottages stands adjacently in Bristol Road itself. {108}
Bristol Road Methodist Church is a red-brick, Romanesque building in St George’s Terrace at the corner of Montague Place, built in 1873 by Thomas Lainson with a three-arch portico and small spire. In 1989 the congregation moved to nearby St Mary’s Church, and the old church was converted into the Advision recording studios.

The following resource(s) is quoted as a general source for the information above: {44,56,62}