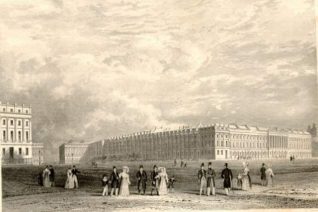 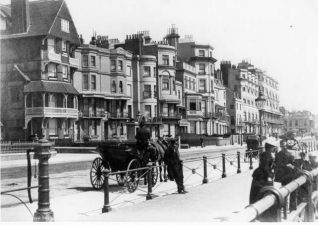 zoom
Marine Parade, c. 1890s: Marine Parade was developed east of the Steine from the 1790s. Many of the houses were refronted by Charles Busby and A. H. Wilds in the 1820s. After the promenade had been developed in 1827-38, the seafront area between Kemp Town and Brunswick Town became a fashionable carriage drive. The building on the left is now the Lanes Hotel. With white windows and verandas against a red-brick and flint background, it was remodelled and refronted in a Queen Anne style in 1880 by Colonel Robert Edis of the Artists' Rifles.
Image reproduced with kind permission from Brighton and Hove in Pictures by Brighton and Hove City Council 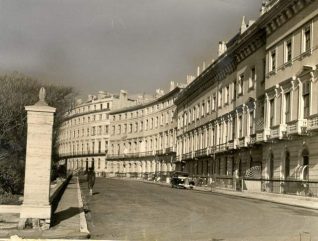 The Brunswick area was developed as an estate of very high-class housing, the western equivalent of Kemp Town, and although it has always lain just within the parish of Hove, that village was nearly a mile away and the estate was considered very much a part of Brighton. It is now an outstanding conservation area and contains many impressive buildings.

In 1824 builder Amon Wilds and architect Charles Busby commenced work on the original estate to the south of Western Road and east of Lansdowne Road for the freeholder, Revd Thomas Scutt. Brunswick Terrace and Brunswick Square, both now listed grade I and decorated with Corinthian pilasters, were finished by 1830, while less expensive housing was provided in Lansdowne Road and Waterloo Street where there are also many listed buildings. The estate church, the grade B St Andrew’s in Waterloo Street, was designed by Charles Barry in 1828 and was the first Italianate church in England. There was also a school in Farman Street and a large market building, now listed; in fact the estate was much more complete and self-contained than Kemp Town ever was.

In 1830 the grade II* Adelaide Crescent was begun to the west of Brunswick Terrace by Decimus Burton on behalf of Sir Isaac Goldsmid, but it was not completed until the 1850s when the design was altered somewhat to include Palmeira Square. This square was built on the site of a giant cast-iron and glass conservatory, the Anthaeum, which unfortunately collapsed on 29 August 1833, the eve of its opening day. Less expensive housing was erected to the north of Western Road in the 1850s at Lansdowne Road, Brunswick Place and Brunswick Road, all bow-fronted and now listed. St John’s Church was erected in 1852-4.

From 1830 the estate was managed under an Act of Parliament by the Brunswick Square Commissioners. Their regulatory area was extended westwards and northwards in 1851, and in 1875 they became the Hove Commissioners, the forerunners of the Hove Corporation which was established in 1898. The Brunswick Town Hall of 1856 still stands at 64 Brunswick Street West but was replaced in 1882 by a new town hall in Church Road by Alfred Waterhouse. This building burnt down in January 1966 and the present Hove Town Hall opened on the site in 1973.

By the mid twentieth century most of the large houses of Brunswick Town had been divided into flats, many lacking basic amenities, and the area has become one of the most deprived in the south-east despite the grandeur of the architecture. Hove Council discussed the demolition of the whole area in 1945, a proposal that led to a massive public outcry, and also to the formation of the Regency Society which is dedicated to the preservation of Brighton. The Brunswick area remains a fascinating, contrasting area of magnificent architecture, interesting mews, and small side streets.

The following resource(s) is quoted as a general source for the information above: {46,100-103}