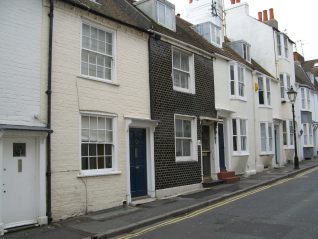 zoom
West Side of Street, numbers 13 & 14
Photo by Josie Campbell

In 1853 Their son John was living at number 13 [the cream one] according to his marriage certificate.By 1861 John Page senior had died & his wife Sarah had moved. John junior died in 1860 and his wife Elizabeth & children were living at number 15 [the white one with the step].