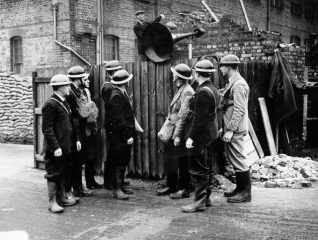 Saturday September 14th 1940 was normally a working day for me, however, because there was no work at the garage I was at home in our basement flat in Chesham Place. After a light lunch my girlfriend Margaret had called round, however my mother had set me a number of chores, before I was allowed out.  Because of my mechanical mind one of the chores was to fit a new electrical flex to the standard lamp that stood in the corner of our lounge/dining room, at the back of our flat.  My girlfriend and mother sat on the sofa under the large rear window, while I worked at the table on the light fitting.

An almighty explosion
My mother was always up at the crack of dawn, and for this reason she always had a nap after lunch in the large front bedroom.  She got up from the sofa, but decided to choose a book to read in bed from the mantelpiece.  At the same time Margaret got up from the sofa and came over to the table where I was working to encourage me to hurry up.  As Margaret urged me to hurry, and my mother dithered over which book to choose, there was an almighty explosion.  The whole building shook, with glasses, cups, plates and ornaments crashing down around us.  The large window at the rear of the lounge came crashing down on the sofa where my mother and girlfriend had just been sitting, and choking dust quickly filled the room.

After the blast
After the initial shock, which stunned all three of us, I quickly checked that both my mother and Margaret were luckily unhurt.  My next thoughts were of my brother-in-law in the top floor flat, John was ill in bed with a terrible cold.  At the rear of our flat were stone steps leading up to the ground floor landing.  I leapt these steps two at a time and was on the hall landing in no time, where I could see the splintered broken front door lying in the hallway, it had been blown off its hinges.  There was a thick cloud of dust everywhere as I started to climb the stairs towards the top floor flat, not knowing what I would find.  Half way up I met John, who was covered in white dust, and was staggering down “Jesus what’s happened Les”, he said, “I was asleep in bed and the next moment I was flung across the room.”  “I think we’ve had a direct hit by a bomb John, are you ok?” I replied.  He confirmed that he was unharmed but disorientated by the sudden unpleasant awakening.  He was dressed in pyjamas and I instructed him to take refuge in the basement with my mother and Margaret.

A bomb exploded on the pavement
When we got down to the ground floor, I stepped over the splintered front door and out onto the street.  Dust was thick in the air, I could feel it on my lungs and I could smell burnt cordite.  Adjacent to the front north corner of our flat, just 7 feet from my mother’s bedroom window, a bomb had exploded on the hard granite kerbstone.  Just a few feet away, adjacent to the kerbstone, I could see someone lying face down on the pavement.  I could tell from the tin hat, which had been pushed back and was now covering the rear of his head, that he was an ARP Warden.  He was motionless and I could see a pool of blood around him.

An ARP Warden had been killed
I was only 20 years old and felt scared; I suspected that he was dead, although I had never seen a dead body before.  I felt tearful, but couldn’t possibly show my feelings and certainly, although I wanted to, I couldn’t turn and walk away.  I felt that the right thing to do was to stay with him.  I didn’t dare touch him, I couldn’t see any movement, and he didn’t appear to be breathing!  I was very scared, but stayed with him.  Very quickly, although it seemed like ages, Dr Beynon, who lived in Eaton Place, appeared.  She knelt down and lifted his head; I could see his face had taken the full force of the explosion with much of it missing.  In the road a car had also taken the blast force of the bomb, shrapnel had pierced the thin bodywork and injured the driver.  He was struggling to get out of the car, but was badly injured and had to be helped out.  After confirming that the ARP Warden was dead Dr Beynon went to the aid of the injured driver.