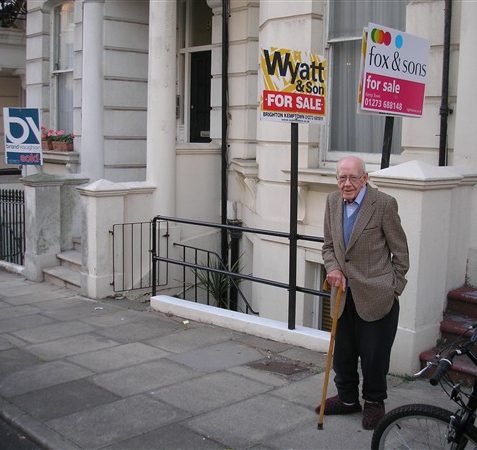 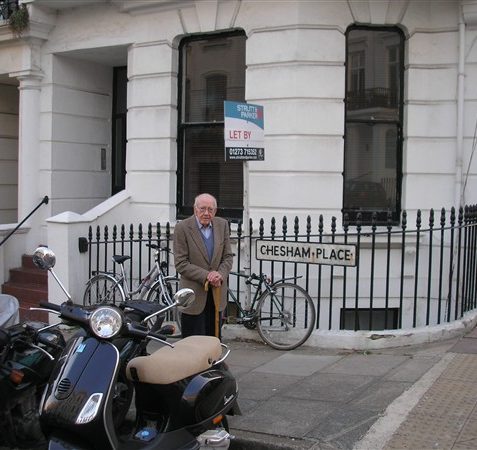 Les outside No 11 Chesham Place, 14th September 2007 - On the very spot where the bomb exploded, exactly 67 years before
Photo by Peter Groves 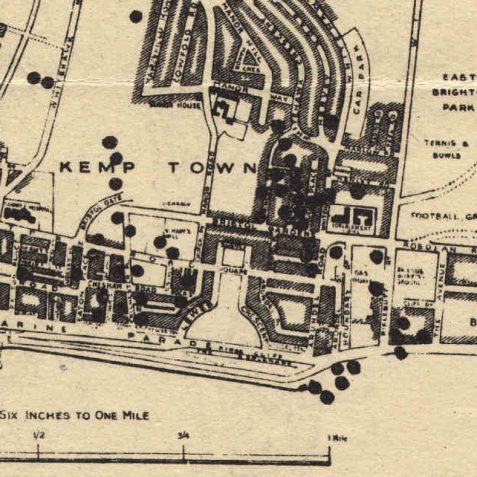 Detail from 'Brighton & Hove Under Fire' reproduced with permission 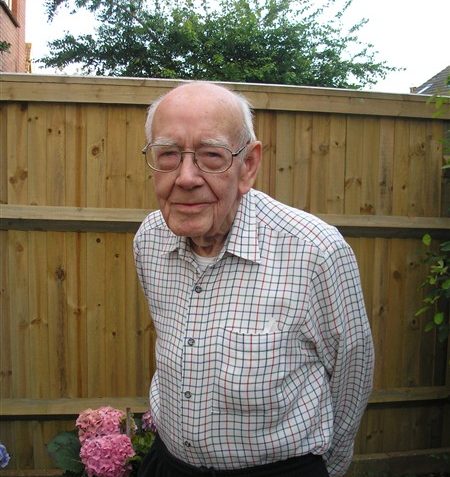 Les Roberts in his garden in 2007
Photo by Peter Groves

Three Bombs
Although at first I had feared a direct hit, the bomb had actually just missed our house and exploded on the kerbstone close by the front door, and adjacent to my mother’s bedroom window.  It was also now becoming clear to me exactly what had happened.  In total three bombs had exploded in Chesham Place, their angular decent from east to west, being caused by the speed and direction of the plane, which had flown over in an east to west direction.
The first had exploded on the roof of a house across the road on the east side of Chesham Place.  The second had crashed through the cast iron railings and exploded in the basement of number 10, the house next door to our basement flat.  The third close by to the second, as described, outside our flat on the kerbstone.  Although 3 bombs had landed in Chesham Place, 20 bombs had been dropped on Kemp Town during that raid!
One of those twenty bombs had landed on the Odeon cinema where children sat watching the afternoon matinee.  There are conflicting reports as to how many people were killed in the cinema, however probably the most accurate is between 53 and 55 killed in the “cinema and surrounding area” during the raid.

Aftermath
The body of the ARP Warden was wrapped in a blanket to be taken to the Park Street mortuary.  A bus was commandeered, which had a large open platform on the back, onto which the body was placed.  My mother was offering tea to the many “officials” who had now arrived in Chesham Place.  Back in our flat I surveyed the extensive damage, I now realised how lucky we had been!  Most badly damaged was the front, which had taken much of the blast force, all of the windows had been blown out.  In the large front bedroom the whole of the lath and plaster ceiling had collapsed and was now lying on my mothers bed.  Had she not spent that few extra moments choosing a book she would have been badly injured whilst in bed.  My girlfriend also had a near miss; by moving from the sofa to my side, she had missed being injured by the glass from the rear window, which was now lying shattered on our sofa!  All three of us had been very lucky to have escaped without a scratch, although debris and glass covered the floor of the flat!

Moving Again!
Our flat was uninhabitable and that evening we had to move in with my brother and his wife who lived in Hollingdean Terrace.  The following morning I was out on my bicycle looking at all the bomb damage from the raid.  I’ve read differing accounts as to the number of bombs dropped on Kemp Town that day, however I can assure you it was 20.  I rode to each bombsite to see the destruction, it was definitely 20.  It was also then that I saw the damaged Odeon, and was told of the children killed inside.  A few days later I quit my job and decided to join-up, I went to Queen’s Road to enlist in the RAF.  I was posted to South Africa and served as a mechanic on many different aeroplanes.

Warwick Street
Warwick Street no longer exists; it was knocked down in the 1970’s redevelopement scheme.  Chesham Place is still there today, and looking at the beautiful Regency buildings it’s almost impossible to imagine the devastation of that day!  However on closer examination, it can be seen that the beautiful cast iron railings are missing from the front of number 10, the scar from Saturday September 14th 1940 still there today, 67 years later!