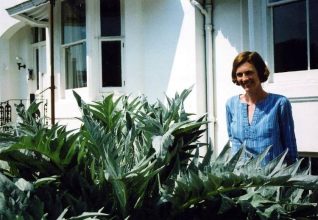 zoom
Sue with her magnificent cardoon plant in the front garden of No. 20
Photo taken by Rosie Page 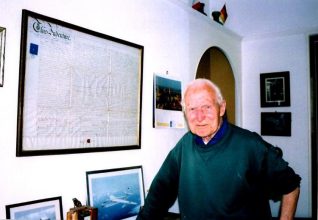 Completed in 1847 this stunning terrace was the last row of houses to be erected in the town which displayed the elegant Regency style. Upwind of the newly built railway terminus Clifton Terrace was considered to be one of the most desirable places to live in Brighton. The terrace is now part of the Clifton Conservation Area and the stylish houses with direct views of the sea are among the most beautiful in the city.

Sue Rubinstein
Sue Rubinstein and her family have lived at number 20 for six years. Sue is an artist and opened her house to the public during the Festival. Her daughter, Manon, showed a video she had made of the changing views of the sea through the trees from her window.

After they moved Sue discovered that her living room had been much photographed. She recognised a picture of their living room from the 1930s on the (then) “MyBrighton” museum exhibit. The caption read only “interior of a house”; but Sue recognised her home from a fixture in the corner. She also saw a photo of the room as it was in the 1940s decorated with an Egyptian theme in “Homes and Gardens”.

When the family renovated the house three or four years ago, she continued to take photos of unusual old features, such as cellar doors and bell pulls, old distemper work and building materials comparable to wattle and daub, and the local “bungarouche”. Bungarouche is a mixture of brick, flint and beach cobbles held together with lime conglomerate.

She also showed me the deeds to the house which are written in immaculate copper plate handwriting. They describe the piece of land on which the house was built as “situated on “Church Hill, formerly called the Western or Tenantry Down” from when the old town was surrounded by just fields and common land.

Mr Tappin
Mr Tappin (affectionately known as Tap) has lived in number 7 since 1972. He remembers all the house conversions from single dwellings to multiple occupation and back again. He says he has enjoyed having nice neighbours all the time he has lived there, “although the people have changed”. “In the past”, he remarked, “there were many more shops ’round the corner and a pub”. And he showed me a particularly interesting old photo showing that the house at the end of the terrace that used to be a pub called “The Clifton Arms“.

Tap showed me his collection of books about Brighton’s history and old photos dating back to the 1860s and ’70s. When renovating in the mid 1970s he found some very old newspapers. A fragment of “The Morning Star” dated 1862 displayed an advertisement for the Great Eastern steamship. At that time you could travel from Liverpool to New York for 6 guineas (£6 6 shillings) if you were prepared to travel steerage. “The News of the World” dated 1925 announced the “promising trial flight of the autogyro” (a propeller plane with a rotating blade like a helicopter).

He also has a beautifully hand written indenture (lettings) document for the house dated 1863, which he has had framed and hangs over the fireplace.