You are here: HomenextPlacesnextStreetsnextDyke RoadnextRoyal Alexandra Hospital for Sick Children 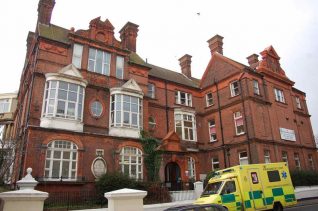 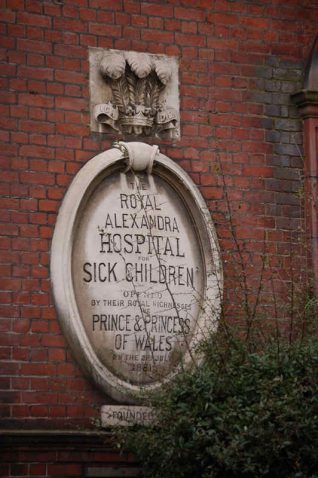 b) ROYAL ALEXANDRA HOSPITAL for SICK CHILDREN : The Brighton Hospital for Sick Children was founded at 178 Western Road on 3 August 1868 by Dr R.P.B.Taafe. It expanded into an adjacent building in 1870, but in the same year the hospital moved to the disused ChurchHillSchool in Dyke Road where it was reopened with twenty beds on 14 July 1871 by the Bishop of Chichester. The present hospital building was erected on the site in 1880-1, a three-storey red-brick building which was opened on 21 July 1881 by Princess Alexandra. Decorated with terracotta mouldings, it was designed in Queen Anne style by Thomas Lainson at a cost of £10,500. The girls’ ward was named the Taafe Ward in honour of the founder.
The Royal Alexandra has now been enlarged to 114 beds. A two-storey out-patient and isolation ward opened in 1904; the east wing was opened by the Duke and Duchess of York on 30 May 1928; and the Gillespie Wing was opened on 4 December 1945 by Princess Elizabeth, who also attended a concert at the Dome in aid of hospital funds. The Cawthorne Ward was converted in 1966 from the 1896 nurses’ home. Since 1954 the patron has been the present Princess Alexandra. {24,98,115}