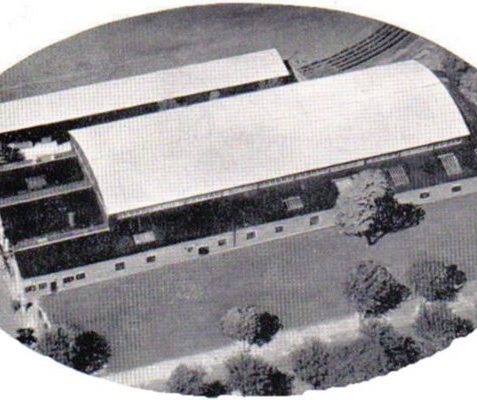 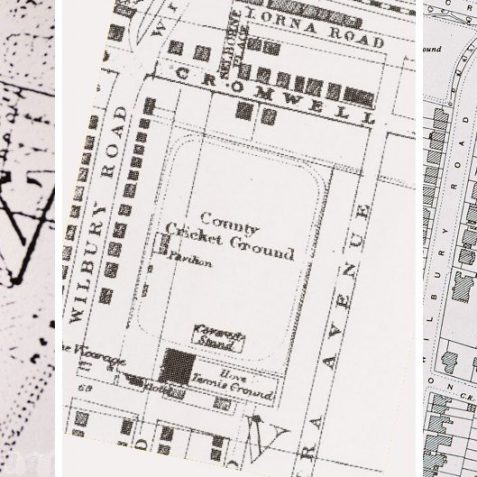 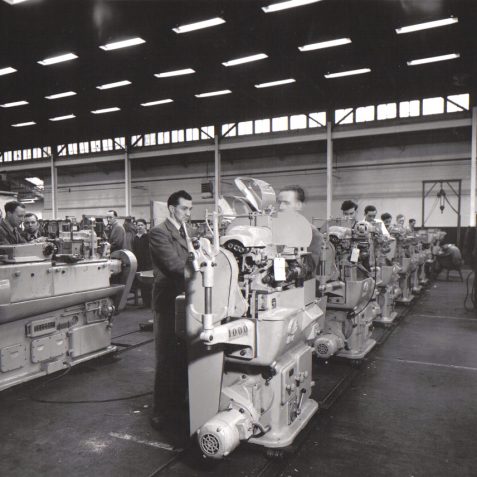 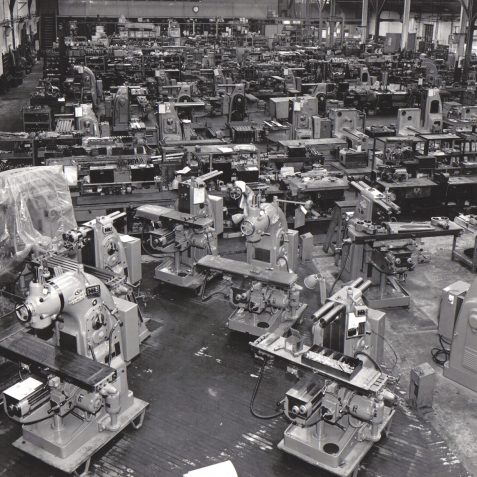 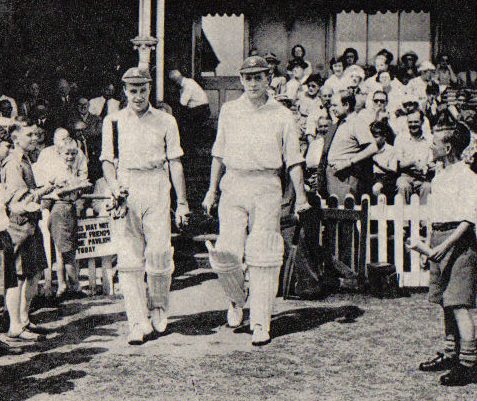 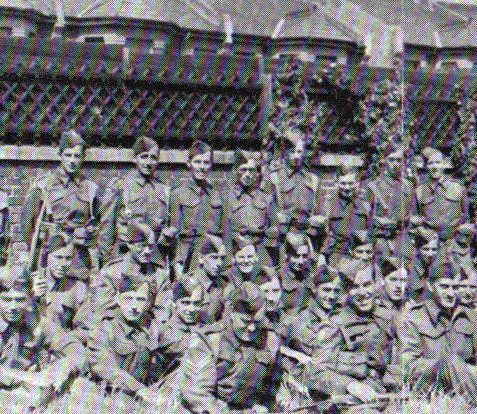 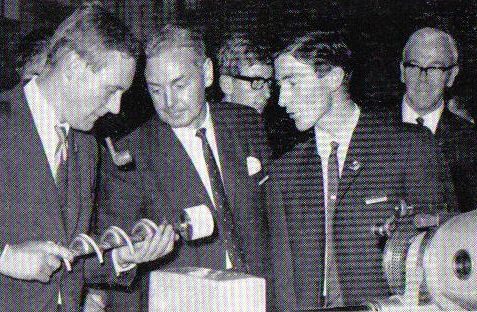 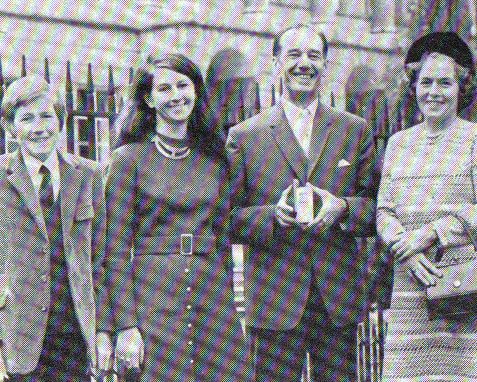 Hove Machine Tool manufacturer CVA was once one of the largest manufacturing employers in the area.  At its peak in the 1960’s over 2000 staff were employed at 7 locations around the Brighton area.  One of these locations was the Machine Assembly Plant in Eaton Road, right in the centre of Hove.

WWII expansion
The Company had expanded during World War II and in 1946 the Eaton Road Assembly Plant was acquired.  The building had previously been an army drill hall, and was located next to the Sussex County Cricket Ground, adjacent to the main entrance and the Cricketers Public House.  Ashdown, the large block of flats, with frontage onto Eaton Road, currently stands on the site, which was once a hive of industrial activity.   The aerial view of the factory shows the cricket ground just visible at the top.  The curved seating can just be seen at the top right.

Sussex County Cricket Club
Sussex County Cricket Club was formed in 1839.  There were three locations in the Brighton & Hove area where they played before finally acquiring the Eaton Road site in 1871 from the trustees of the Stanford Estate.  The area in the south-east corner of the ground is marked as a Skating Rink in the 6″ OS map of 1873.  Bacon’s map of 1896 has the same area is marked as Hove Tennis Ground.   In the Godfrey Edition of the Ordnance Survey Map of 1930 the area is marked as the County Sports Club.  The building on this area was to become the Machine Assembly Plant in 1946.

Machine Tool Assembly
A number of large machine tools were assembled at the Eaton Road factory, one of which was the CVA Automatic Lathe.  This lathe was developed by the Company in Portland Road Hove during the early 1940’s and the first single spindle automatic lathe was completed in 1945.  During the late 1940’s and early 1950’s these were being assembled at the rate of thirty-three a month, and a waiting list to purchase grew.  This lathe was to become quite famous in the precision engineering industry, and eventually there was a full range of different models, which were exported all around the world.  The production line and the lathes under final test can be seen in the photograph.  The size of the factory can be appreciated.  The significance of the photograph is that the lathe in the foreground was the 1000th off the production line.  The number can be just seen attached to the lathe.

Licence agreement with Kearney & Trecker
Another product range assembled at Eaton Road was the Kearney & Trecker milling machine.  These machines were designed in the USA, by Kearney & Trecker Corporation, one of the biggest Machine Tool manufactures in the world.  Agreement was reached with CVA in 1947 to manufacturer them under licence in Hove.  The first milling machine was assembled in Eaton Road in 1948.  The major castings for both the CVA Automatic Lathe and the range of Kearney & Trecker milling machines were cast at the Portland Road foundry.  Some of these castings weighed up to 2 tons.  They were then transported to Littlehampton where, in the 1950’s the Company had its Heavy Machine Shop.  Precision slideways were then machined onto the castings, before they were transported back to Eaton Road for final hand scraping  to an accuracy of a few microns, before assembly.

Cricket for free
Cricket was of great interest to many of the employees.  The rear wall of the factory yard backed onto the cricket ground.  At tea break and lunch times in the summer the rear wall was crammed with employees watching the match for free!  During important matches there was a temptation to sneak out for a quick check on the score during work time!  The assembly manager Bob Morris had his hands full to keep minds on the job!  There were many favourite cricketers to be seen at the County Ground, David Shepherd was one of these!  The Reverend David Shepherd was later to become the famous Bishop of Liverpool, who died in 2005.

Liquid temptations
Another temptation to some of the workforce was the Cricketers Public House adjacent to the factory.  It was not unknown for the manager Bob Morris to have to check the pub at the end of the lunch hour on Friday.  Anyone who had drunk too much would be sent home for the afternoon!

From apprentice to assembly manager
Bob Morris joined CVA as a 14-year-old apprentice in 1935 at the Portland Road factory.  By the outbreak of World War II he had almost completed his apprenticeship.  Like his chums he went to join-up to fight, but was refused due to his “reserved occupation”.  His skills were much needed by the country in manufacturing, particularly building machine tools, which are the heart and start of every manufacturing process.  Barely 20 years old, Bob joined the Home Guard; CVA had their own company.  Bob Morris moved to the Eaton Road factory soon after it opened in 1946 and was soon promoted, firstly to supervisor and then assembly manager, before he was 30 years old.

Queen’s Award to Industry
The pinnacle of this success was the announcement on 21st April 1969 when the Company was awarded the Queens Award to Industry for Export Achievement.  CVA was one of only 99 companies in the country to receive the award in that year, and the only one in Sussex.  Special notices, signed by Bill Neill, the Managing Director, were posted on notice boards around the Company, paying tribute to all employees for the teamwork, which had led to the award.  Speaking later on Radio Brighton Mr Newing, the Director of Sales, explained that exports sales had increased by 173% in the previous 3 years.  In particular new markets had been opened up in Brazil, Mexico and Argentina, previously dominated by German and US manufactures.  Almost 38% of everything manufactured by the Company had been exported.  The following year, further individual awards were made, of these it was announced the in the Queen’s Birthday honours list, that Bob Morris was to be awarded the B.E.M. in recognition of his services to the exports drive.  Bob was presented with the award at Lancaster House in London by the Rt. Hon. Sir John Eden, on behalf of Her Majesty the Queen.

Factory closure in 1969
Assembly of large machines continued at Eaton Road right up to the end of 1969.  Since 1957 US Machine Tool manufacturer Kearney & Trecker Corporation had controlling interest of CVA, and their plans were to centralise production at the new industrial estate at Hollingbury.  Eaton Road closed late in 1969 with production and staff being moved to the new estate. On the last day before the plant closed all 140 employees gathered with Bob Morris by the Eaton Road entrance for a last photo.