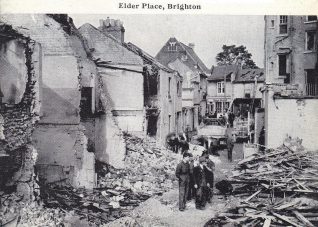 Elder Place/St Bartholomew’s? Click on image to open a larger version in a new window 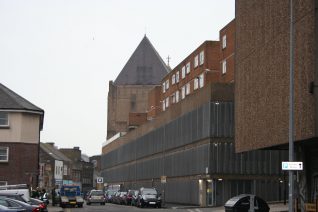 St Bartholomew’s from Elder Place. Click on image to open a larger version in a new window 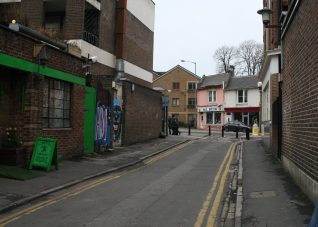 Elder Place, view towards New England Road. Click on image to open a larger version in a new window

The Brighton Bombing Map has a bomb marked in Elder Place; but it shows St. Bartholomew’s on the left, which is not the case. On checking the Bombing Map again, I considered that the photograph might be Elder Street and not Elder Place. However, If that was the case, then the marking on the map must be incorrect. I decided  that a visit to the location would be necessary in order to solve the mystery.

Armed with my camera, and the photograph, I drove down New England Road (I always call it New England Hill) and turned right into New England Street. Watching carefully for traffic wardens, I double-parked in Elder Place. and looked up at St. Bartholomew’s. it was very clear that the roof was not the one in the photograph. I got back in my car and drove through Providence Place to view the church from the opposite end, but quickly realised it was definitely not the same building as that in the photograph.

It was clear to me that the church in question was not St. Bartholomew’s and I had decided to go home and so some research, when I remembered that there used to be a church in New England Road, at the bottom, opposite the bus stop. I was sure the mystery was now solved, so I quickly doubled back into Elder Place,and took the photo, which confirmed it. I had originally assumed it was St. Bartholomew’s, but was looking in the wrong direction and at the wrong church.  Back at home I checked my 1930 large scale OS map, which established it was the St Saviour’s Mission in the background, demolished in the early 1990s and replaced by a small block of flats.

Panoramic view of the cleared area from New England Street, showing the cleared Elder Street and the site of the narrow Elder Row. The photograph was taken in August, 1961. In New England Road is seen the St Saviour’s Mission where the last service had been held on Whit Sunday, 1961. This was built in 1874 and in 1920 it was licensed and affiliated to St Saviour’s church, Ditchling Road.