The house with painted windows 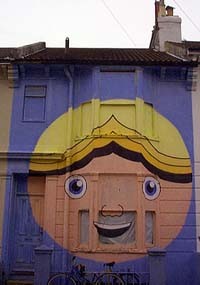 This intrigues me, and intrigues visitors. It’s a house that is completely painted over – even the windows. I live nearby and my visitors are horrified: ‘How do they see!’. I think it was painted during a Brighton Festival in the early 90s, but I’m not sure. I never thought it would last so many years.