Hollingbury and the Airbus (Part 3) 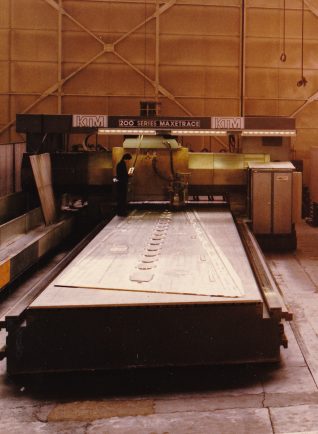 The standard 200 Series Max-E-Trace high-speed routing machine was already proven technology, installed and in production at many sites around the UK.  However the proposal by KTM was to manufacture a special huge 5 axis 200 Series Max-E-Trace, with two independent cutting spindles, mounted on two independent beams, which would travel along a bed with an overall length of 66 metres, as long as 3 cricket pitches!  There were distinct advantages with this solution, firstly and most importantly; it would have the capability to guarantee the high production levels required by British Aerospace.  The key to this was that two wings sections would fit onto the 66 metre long X-bed, both being cut simultaneously.  Secondly, the 5 axis would have the capability to cut the intricately complicated shaped wings originally developed by Hawker-Siddeley.  Furthermore, there were other advantages of  having one huge machine, it would take up far less floor space than two independent machines and would use a common power source.

The order was eventually placed with KTM in 1981, with an 18-month programme agreed for final design and manufacture.  British Aerospace engineers then made regular visits to Brighton from Chester to check on progress and agree any technical issues.