Hollingbury and the Airbus (Part 4) 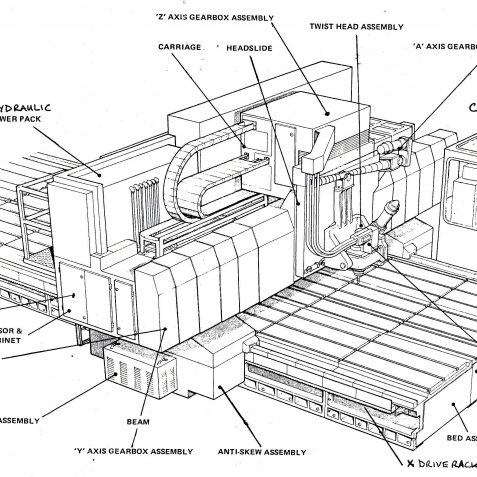 The 200 Series Maxetrace schematic, taken from the Service Manual
From the private collection of Peter Gibney 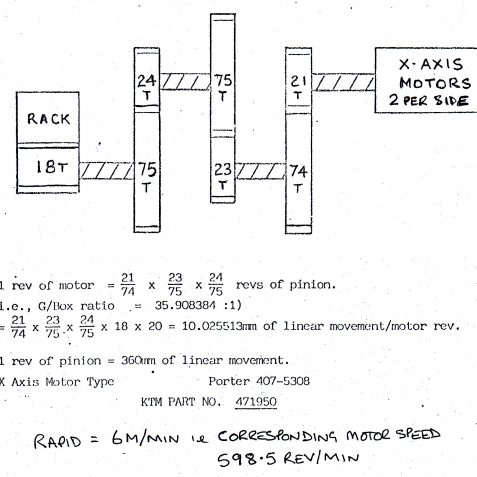 X axis gearbox configuration and calculations, taken from the engineers' initial design specification
From the private collection of Peter Gibney 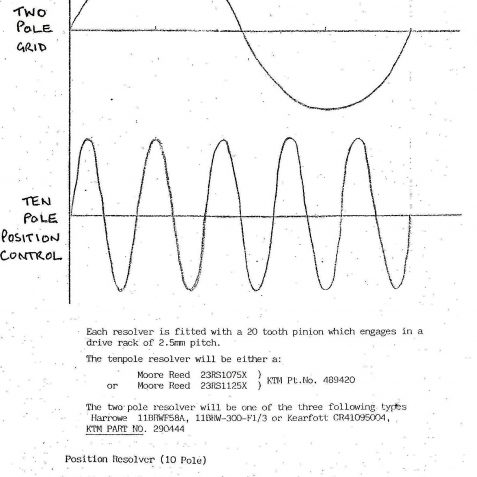 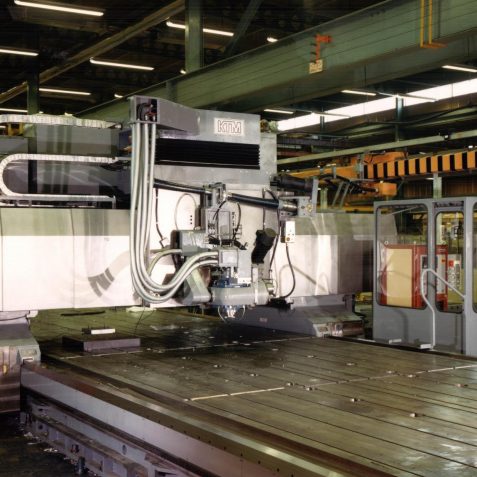 The X-axis bed was constructed from precision planned cast iron sections bolted together and accurately aligned using an Auto-collimator.  Each bed section being 2 metres long and over 1 metre wide, with 3 fitted across the width, giving an overall bed size of 66 metres long by 4 metres wide.  Huge precision hardened steel guide ways were fitted to each side of the bed, with drive racks positioned directly underneath, these had to be heavy duty to take the weight and move the huge Y-axis gantry beam along the linear X-axis.  The total weight of the 66 metre X – bed was estimated at 500 tons.

Y – Gantry Beam, plus Z, A and B axis, technical data

Both of the 2 Gantry Beams housing the Y-axis were constructed from thick fabricated stress relieved steel and were over 4.5 metres wide.  Each Gantry Beam travelled along the fixed X – bed, carrying the rest of the machine as a self-contained assembly.  The Y-axis had a full cutting stroke of 3.85 metres driven by a DC motor and recirculating ballscrew.  Along with the Y-axis, the Z, A, and B axis were also mounted on the Gantry Beam.  The Z-axis vertical Head Slide being linear with a 0.45 metre cutting stroke, and the A and B axis being angular cutting axes of +/- 30 degrees and +/- 60 degrees respectively.  Also mounted to this was the 10,000 rev/min. water and air cooled cutting spindle, driven by an 80kW 3 phase router head powered by a Brentford Electric inverter drive. Additionally the ancillary equipment was completely self contained on the travelling Gantry Beam; hydraulics, lubrication, coolant and electrical panels, giving a total weight of the Gantry beam at over 35 tons!  The combined overall size of the machine was, 66mts (216ft 6ins) long,  8.75mts (28ft 8ins) width,  3.5mts (11ft 6ins) height.

One of the many technical difficulties to overcome was how to achieve high responsiveness and accurate positioning of the massively heavy Gantry Beam along the X-axis bed.  The Gantries of similar but smaller machines were driven on only one side, with the opposite “slave” side following.  However the Gantry on 200 Series Max-E-Trace machine was driven on both sides of the bed, using anti backlash gearboxes each with two DC servo motors and drive pinions engaged into the rack mounted on each side of the X-axis bed.  The pinions of each gearbox were always driving in opposite directions at 10% torque at standstill to remove any backlash.  When a positive move was commanded, the gearbox positive motor would overcome the resistance of the anti-backlash negative motor, which continued to drive in the opposite direction, and move the beam in the positive direction. The opposite was true for changes of direction, ensuring that whilst mechanically slack existed, it was always eliminated and not transmitted to the cutting spindle causing poor accuracy.  It was also necessary to synchronise the 2 gearboxes to keep the Gantry moving square to the bed. This was achieved by having “measuring” resolver feedback on each side of the bed driven by separate “high precision” rack and pinion. Two resolvers were used on each side ‘coarse’ and ‘fine’ resolutions each monitored against each other and each side. This method proved successful in eliminating skew of the beam and maintaining very high positioning accuracy of 2.4414062 microns.

Each Beam assembly was connected to the power supply via a sliding contact 3-phase 415V 300A bus bar system which was installed along the entire length of the X-axis bed, mounted 3 metres above floor level.

The huge raw aluminium alloy billets, which were to be machined into wing skins, were clamped to the machine by vacuum.  Unlike conventional mechanical clamping, a powerful vacuum pump removed the air from under the billet, which was positioned on top of a self-sealing vacuum chuck thus utilising the air pressure above the billet to hold the billet down and flat onto the machine bed. This allowed the cutter 100% access to the billet for machining.  There was a second smaller bus bar system, which carried the signals from the vacuum clamping equipment to the machine CNC control, to warn of vacuum failure.  Failure of the clamps could cause very expensive scrap, however this was extremely unlikely as triple redundancy equipment was used.  If one vacuum pump failed, the second would automatically switch to operational mode and likewise if the second failed, the third would automatically take over.

The heart of the machine was a Kongsberg 2000M Computer Numeric Control.  All machine functions were interfaced in software, including running the computer generated “part programme” that controlled all axis and spindle during the complex cutting of the aluminium alloy billets.  The CNC 2000M was based around a NATO KS500 minicomputer, adapted for use as a CNC by Kongsberg Vapenfabrikk in Norway, with the first prototype being built in 1965 and production versions placed on the market from 1970.  This was one of the earliest controllers available to machine tool builders and was running Assembler software, whereas earlier machine controllers were hardwired.