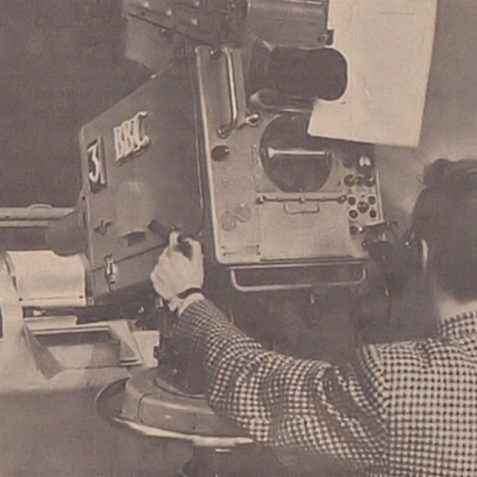 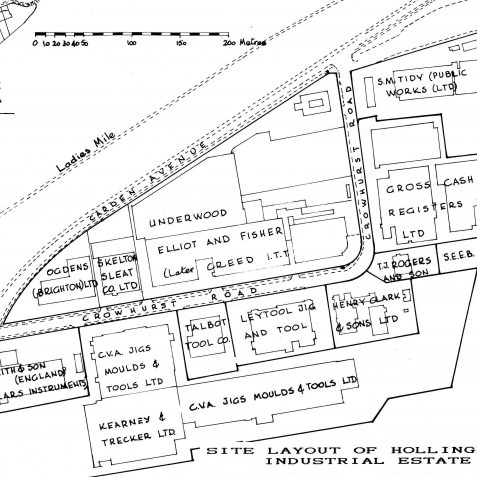 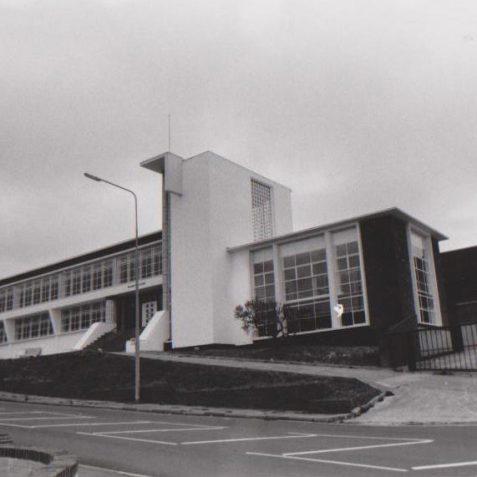 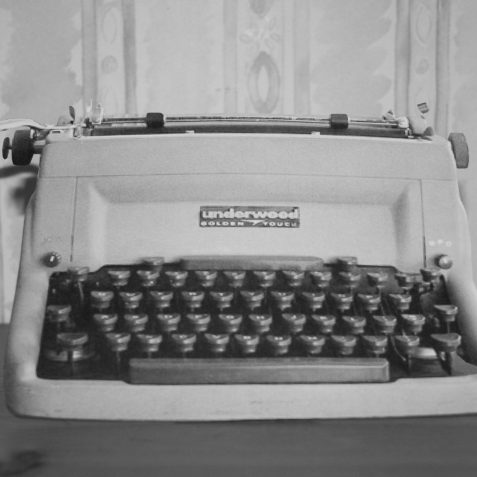 The "Underwood Golden Touch"
From the private collection of Peter Groves 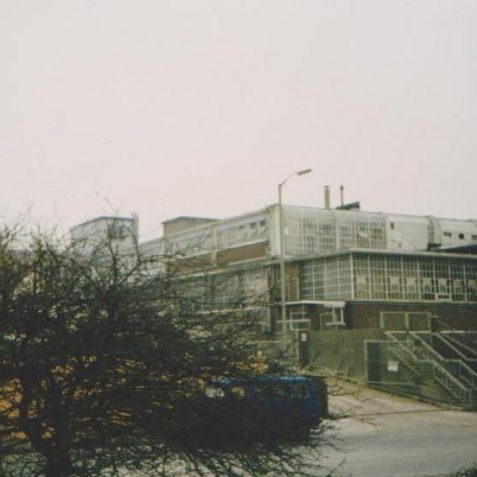 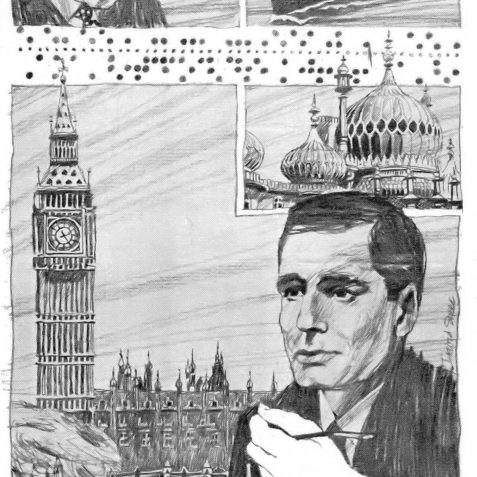 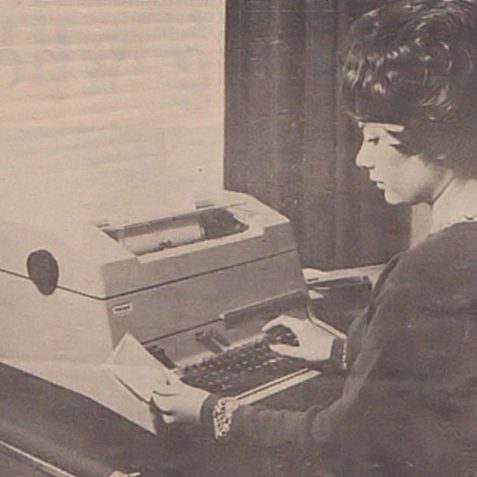 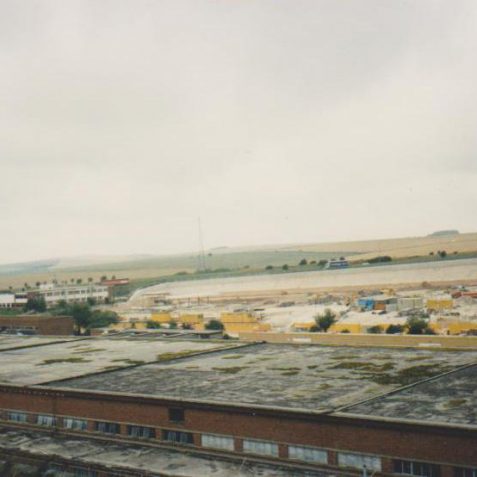 The old ITT Creed site after demolition, with the new Asda building on the right, c. 1987
Photo by Hugh Fermer, now in the private collection of Peter Groves

Many fifty-something mybrightonandhove bloggers, will like me remember, cold, dark, wet winter Saturday afternoons, in front of the coal fire, waiting for the football results to appear like magic, from an extraordinary machine, whose strange printer head, bobbed up-and-down, doing mostly nothing, and then suddenly burst into life and printed the result we had been waiting for!  Most people from Brighton however, will be totally unaware that the teleprinter that brought the results was manufactured in Hollingbury!

The Hollingbury Industrial Estate, developed in the post war period, has had a long established association with keyboard machines.  One of the first factories built on the estate for Typewriter Sundries Ltd, was completed in 1948. The building was taken over in the late 1950’s by the North London company, Gross Cash Registers. Gross Cash Registers had their most successful period during the 1971 switchover to decimal currency. This was due to one of the two founding brothers, Henry Gross, who managed to invent a machine with the ability to instantly switch from £sd to £p during the changeover. In the mid 1980’s the company was badly affected by competition from Japan and was eventually sold to Chubb.

Another one of the original factories built on the estate was for Underwood Business Machines, part of the iconic American Underwood Typewriter Company.  Manual typewriters, as used by thousands of secretaries, journalists and writers, were manufactured on what is now the north side of the Asda car park during the 1950’s. Adjacent to Underwoods was Elliott & Fisher; they had been part of the Underwood group since 1927 and produced related book typing equipment.

Although it can’t be said that Frederick George Creed invented the teleprinter, the name Creed was to become the most widely recognised as teleprinters and associated technologies evolved.  Creed was born in Canada in 1871, where he taught himself telegraphy. The long hours spent gripping the Morse code key caused permanent damage to his right hand. He thought that there must be a better way to transmit information. Creed moved to Scotland, and by modifying a second-hand typewriter he produced his first keyboard perforator, which used compressed air to punch holes in paper tape.

Creed also created a receiving perforator, to punch incoming signals, which were then decoded and printed as alphanumeric characters. This was the origin of the Creed High Speed Automatic Printing System. Creed’s first order for the new machine was from the Post Office in 1902.  By 1909 he had set-up a factory in Croydon and soon won an order from the Daily Mail newspaper to use his system to transmit the entire contents of its paper between London and Manchester.  In 1928 Creed & Company Ltd became a British subsidiary of the American company International Telephone & Telegraph Corporation (ITT).

In 1959 Olivetti bought controlling interest in Underwood; the merger was completed a few years later in 1963.  Up the A23 in Croydon, Creed had expanded since 1909 and were now located on 4 different sites in the area. The largest, close to East Croydon Station, was hemmed in by roads on all 4 sides; there was no possibility for further expansion. The Company wanted to move to a new site, adjacent to Croydon Aerodrome at Wallington, where they would build a purpose built factory, with room for expansion.  Luckily for Brighton the necessary planning consent with the local council failed.  Back down the A23 in Brighton, where the tourism industry was still the main employer, manufacturing was positively encouraged on the Hollingbury Industrial Estate. The estate had been developed, with a mixture of building ownership between the council and lessee; the council retaining ownership of the land.

The ITT Creed move to Hollingbury

Croydon’s loss was Brighton’s gain; the move to Hollingbury was gradually phased during the mid 1960’s. Many key workers from Croydon commuted to Hollingbury each day to set up facilities in the old Underwood factory, and ensure a smooth transition to Brighton, which was completed around 1966. Agreement was reached to employ many of the Underwood workers, who were facing redundancy. Additionally much of the old Underwood plant and machinery was well suited to make Creed components; many were very similar to typewriter parts. Numerous staff were recruited locally and by 1967 nearly 1600 staff had been employed. The workforce rose to 2000 by the early 1970’s, when ITT Creed was considered the biggest manufacturing employer in the town, bigger even than Allen West or Kearney & Trecker.

At this time the teleprinter was considered the “magic messenger” with signals travelling the globe at the speed of light, communication had never been faster.  The Company’s products, manufactured in Brighton, were sold around the world.  The biggest customer by far was the GPO (General Post Office) with its Telex service; enabling businessmen around the world hold printed “conversations” with each other.   The list of customers included; armed forces, banking, the Press Association, Scotland Yard, transportation, steel, textile and chemical companies, the list was endless, and of course the good old BBC!

In 1975 the ITT Creed name was change to STC, both Creed and STC (Standard Telephone and Cables) were part of the ITT group.   With developments in   computer   technology influencing telecoms, by the mid 1980’s STC seemed to lose its way and the factory closed.  The Asda supermarket was developed on the site with the store opening on the 9th November 1987.

In the 1960’s, everyone who was interested in football, and probably most who weren’t, could easily recognise the in-tone sound of the voice of Australian Len Martin, who read the football results on Grandstand, however very few were aware that the machine bringing those results was made in Hollingbury, “Grimsby Town 1 – Brighton & Hove Albion……………”?

I would like to thank Eric Parrott for the information he provided regarding the ITT Creed move from Croydon.  Eric was one of the staff who commuted down to Brighton during the move to Hollingbury.