Coventry of the South

In the post war period Brighton became known as the “Coventry of the South” due to CVA  and its very highly skilled tool making capability. Coventry became industrialised during the 19th century, and by WWII was well-known for its tool making and machine tool industry, but Brighton, surely not? 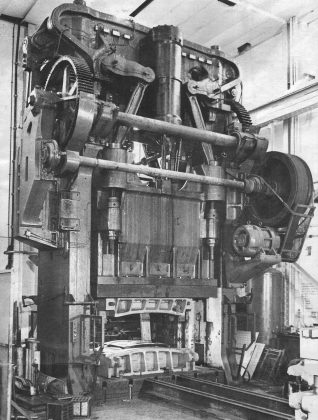 CVA had been manufacturing their High Speed Dieing Press  at the Kemp Town factory  since the end of WWII, production and the associated tool making was transferred to the Hollingbury No 2 Factory in 1952.  It was through their highly skilled tool making, recognised during the 1950’s, that strong relationships were formed with the automotive industry, and they won orders from British car manufacturers to produce the tools for the manufacture of car body panels.

It was not the body panels that they made, but the press tools to make them.  However once the tool was manufactured, it needed to be tested or “proved” before being delivered to the customer; the car manufacturer.  Unlike the High Speed Dieing Press, which was only suitable up to 100 tons, a much bigger press was required to produce the large body panel tools.

It was probably after construction of the large No 6 Factory  in 1958, that CVA/Kearney & Trecker purchased the huge Bliss Toledo Toggle Press, which had a combined force of 1,090 tons!  The press is seen in the photo at the rear of the No 6 Factory, with a car body panel die under test.  It’s not difficult to estimate its size; the 12” box plate at the bottom right of the photo were very common in the factory, and by calculation the height of the press would be around 30ft!

Visit by the Mayor Stanley Deason

In 1964 the socialist Brighton Mayor Stanley Deason visited the factory; his tour included a visit to the huge Bliss Toledo Toggle Press and car body panels under test.  The Mayor is seen in the centre, with Production Manager Percy Steer (MBE) on the left, and Works Manager George Solly on the right.  The 3 can be seen examining car roof panels in the foreground, with the press in the background.

In 1966 Kearney & Trecker took full controlling interest of the Company, and the focus was to be on machine tools only.  The intellectual property rights to the CVA High Speed Dieing Press were sold to Rockwell in 1970, and tool making was wound down.  The huge Bliss Toledo Toggle Press was sold by auction; however the strong relationships formed with the automotive industry were to continue with the Special Purpose Machine Division. 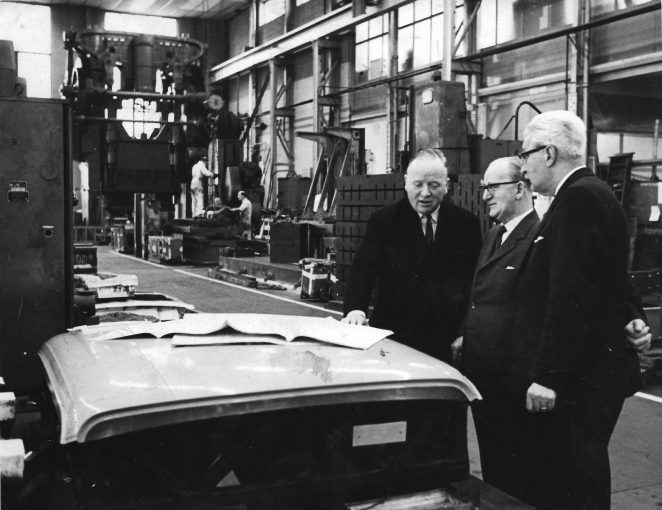 Visit by the Socialist Mayor Stanley Deason in 1964