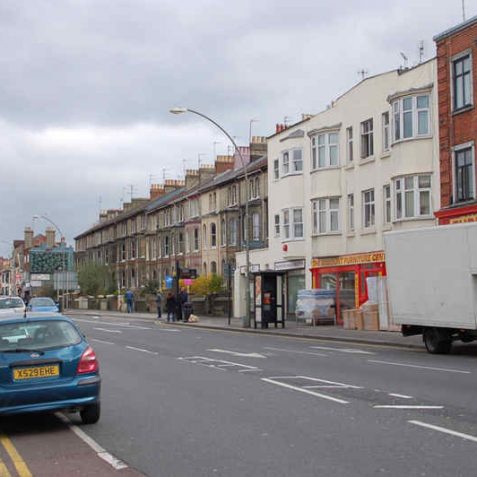 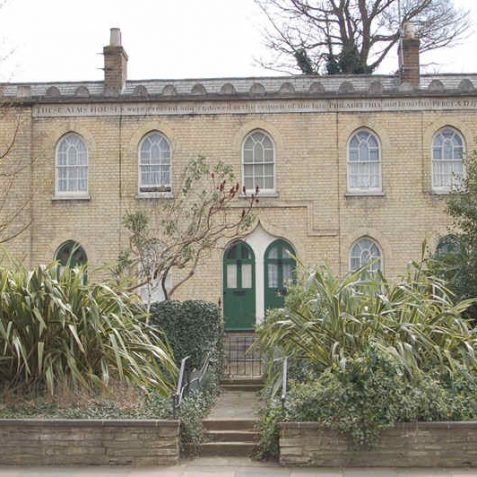 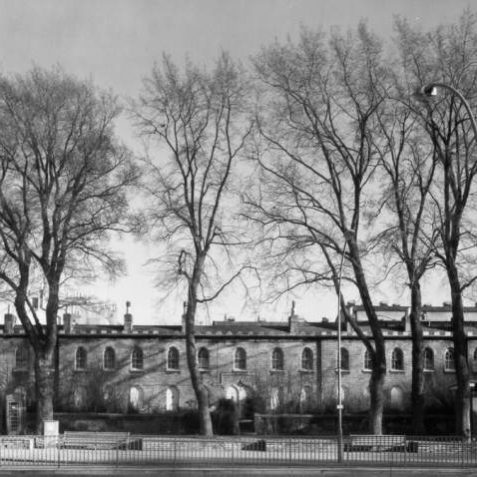 Percy and Wagner Almshouses, c. 1970: In 1795 six yellow-brick almshouses were built in memory of the late Dorothy and Philadelphia Percy, daughters of the Duke of Northumberland. They housed six poor widows of the Church of England, who were also granted £48 a year and a new gown and cloak every two years. These, now numbers 4 to 9, were the first Gothic revival buildings in Brighton. In 1859 more almshouses were added either side by Revd Henry Wagner and his sister Mary, in memory of the Marquess of Bristol. In the 1960s there were plans to demolish these almshouses, but in March 1971 they were listed and restored in 1975-6.
Image reproduced with kind permission from Brighton and Hove in Pictures by Brighton and Hove City Council 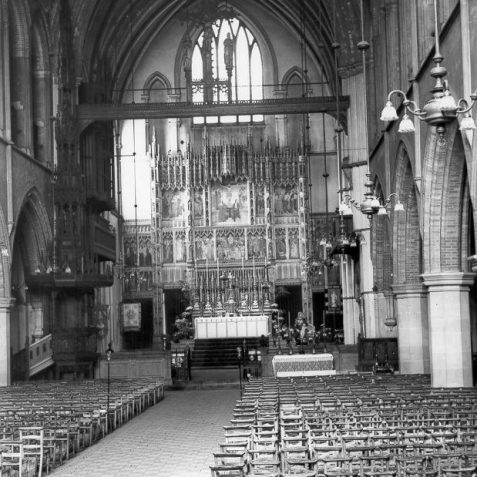 Interior of St. Martin's Church, 1935: The Interior of St. Martin's Church was designed by George Somers Clarke, who also built the church in 1872-75. There is a clerestoried nave sixty-nine feet high, aisles, chancel and an eastern chapel. Behind the altar is a large reredos by H. Ellis Wooldridge of 20 pictures and 69 statuettes. The roof panels are painted with representations of colonial and American sees.
Image reproduced with kind permission from Brighton and Hove in Pictures by Brighton and Hove City Council 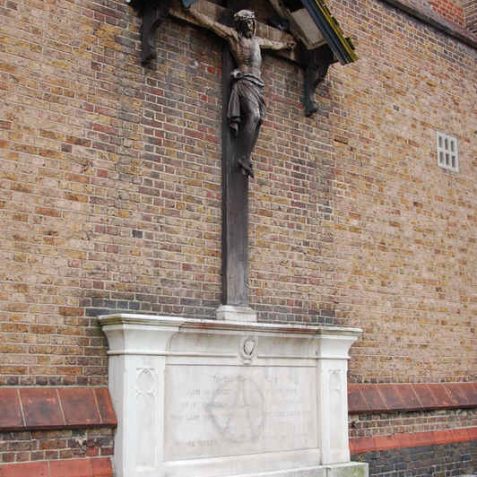 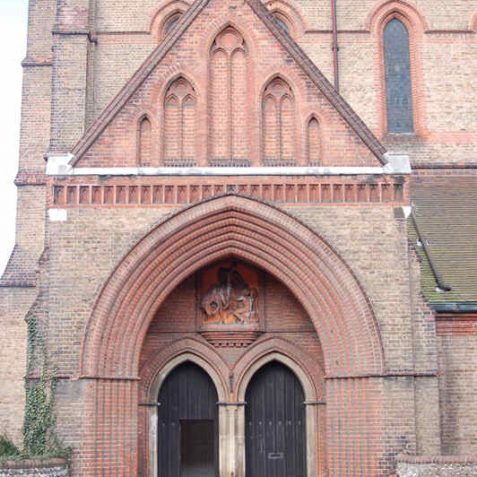 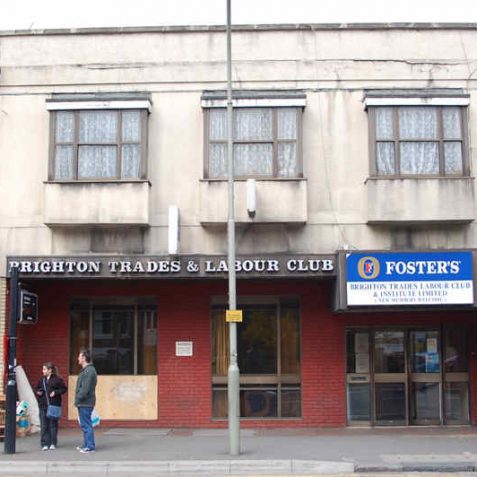 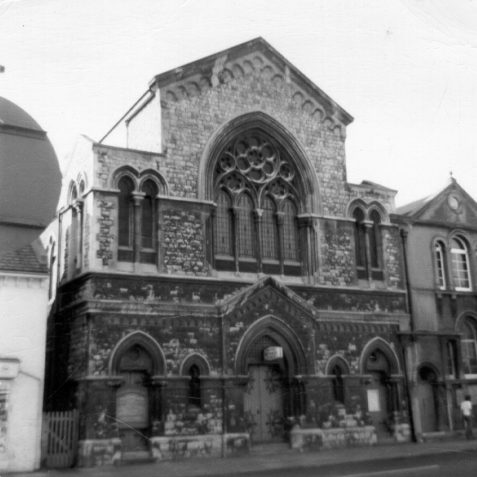 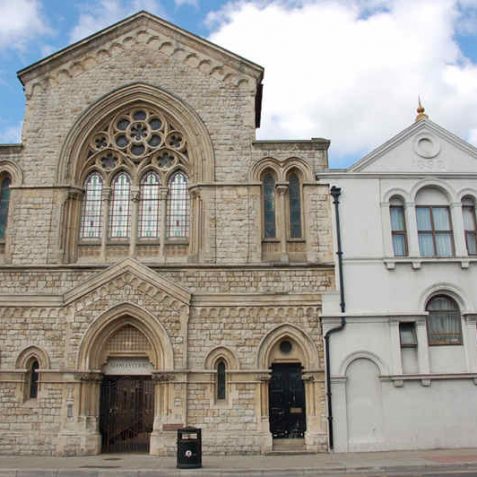 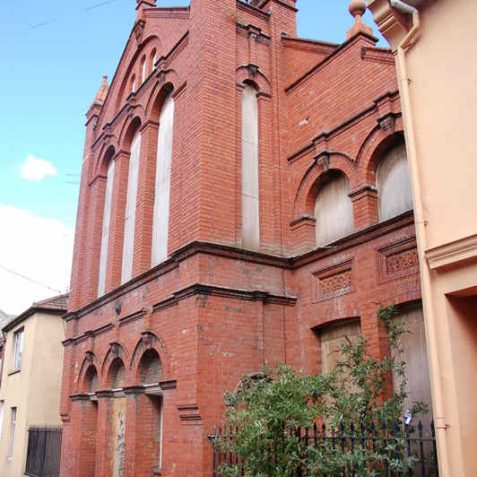 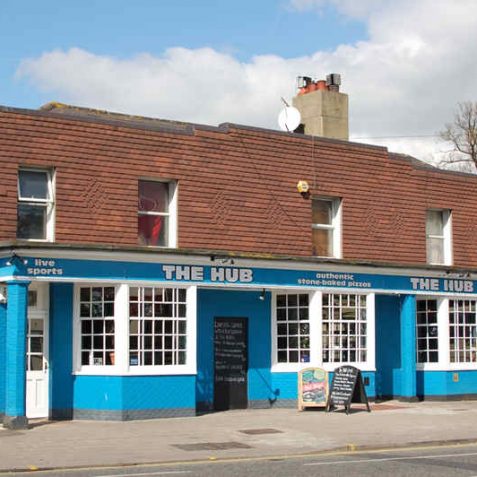 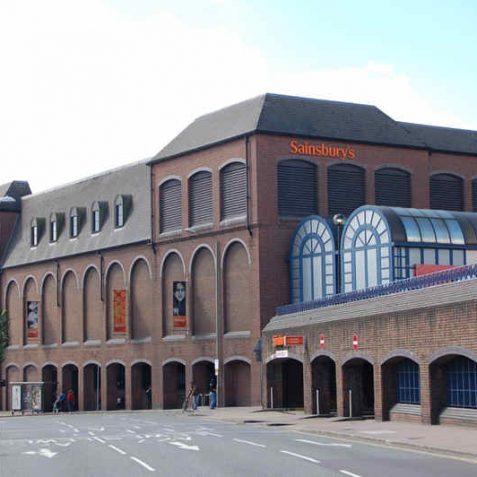 Sainsbury's store on the Vogue Gyratory
Photo by Tony Mould

b) PERCY AND WAGNER ALMSHOUSES : The town’s only remaining almshouses stand by the bottom of Elm Grove , but when they were built in 1795 it was in a then quite isolated position. They were erected to the memory of the late Dorothy and Philadelphia Percy, the daughters of the Duke of Northumberland, and were provided for six poor widows of the Church of England who, having received no parish relief, were also given £48 per annum and a new gown and cloak every second year; this was later increased to £96 and two gowns and bonnets each year, and a duffel coat every third year. The original houses, nos.4-9, were the first Gothic revival buildings in Brighton; they were added to in 1859 at the expense of Revd Henry Wagner and his sister Mary in memory of the Marquess of Bristol. The yellow-brick houses, now amongst the oldest in the town, were to be demolished in the 1960s, but happily they were listed in March 1971 and restored in 1975-6. {3,44,65,123}

c) ST.MARTIN’S CHURCH: The congregation of St Martin’s originally used the former school building (now flats) of 1867 in St Martin’s Street, but the permanent church was built in 1872-5 by George Somers Clarke for the three sons of Revd Henry Wagner in memory of their late father. Consecrated on 1 May 1875, the listed building is in Early English style with pinnacled buttresses at both ends and a large pitched roof. The entrance is a large, ribbed Gothic arch with a bas-relief of St Martin and the Beggar, and on the southern exterior wall is a memorial to the men of the parish who fell in the Great War. The interior, also designed by Clarke, is very large and spacious, with a clerestoried nave sixty-nine feet high, aisles, chancel, and an eastern chapel. Its decoration has been called the most beautiful in Brighton; the roof panels are painted with representations of colonial and American sees, while the altar, dating from 1949, is adorned by a large reredos by H.Ellis Wooldridge of twenty pictures and sixty-nine statuettes. The church seats a congregation of 1,500, and due to its proximity to Preston Barracks was Brighton’s ‘military’ church for many years. The adjacent Wagner Memorial Hall was erected in 1905. The parish, which was created in October 1875, has now merged into the parish of the Resurrection. {1,44,45,65}

d) OTHER BUILDINGS to BEAR ROAD : The Trades and Labour Club, 16 Lewes Road, stands on the site of the Arcadia Cinema . In about 1907 Tilleys horse-bus stables, with an entrance in Park Crescent Place, were let to a fairground animated-picture operator as the Arcadia Theatre of Varieties; both film-shows and variety acts were presented, and the famous escapologist Harry Houdini performed on the stage. In 1910 a permanent 478-seat cinema, the People’s PicturePalace, opened on the site, soon changing its name to the Arcadia Cinema, and an entrance was made in Lewes Road. It closed in 1957. On the opposite side of the road is the impressive Gladstone Terrace, erected in the late 1860s and faced in an attractive brick. {68,68a,83,123}

Lewes Road United Reformed Church was built as a Congregational chapel in 1878 by A.Harford in Italian Gothic style, and has an adjacent church hall of 1892 {62}. On the eastern side of the road, the Franklin Tavern was rebuilt after receiving a direct hit during an air-raid in which several people were killed {242}.

At 131 Lewes Road, with another entrance in Melbourne Street, stands the New Life Centre. Formerly the Connaught Institute, the two-storey, red-brick building opened in 1879 as a soldiers’ home and mechanics’ institute. It housed a temperance bar, reading-rooms, lecture-rooms, etc., and also a branch of the Medical Mission which administered to the sick in their own homes. The hall seats 1,000 and is now used by the Connaught Christian Fellowship. {24,83}
Alfred Edgar Coppard (1878-1957), short-story writer and poet, was born just off Lewes Road at the now demolished 28 Melbourne Street, but had moved to 27 Gladstone Place by 1905. {83a,296}

The junction of Lewes, Bear , Hollingdean and Upper Lewes Roads is known as the ‘Vogue gyratory system’ after the former Vogue Cinema. Built as the Gaiety in 1937 in the grounds of the Allen Arms (now the Counting House), the cinema had a fifty-foot high neon-lit façade. In November 1965 it was renamed the Ace, and in January 1968 became a full-time bingo hall, but films were presented again from December 1969 and in 1971 the name was changed to the Vogue. It later became a pornographic film club with regular strip-tease acts, but in 1979 the 1,500-seat Vogue was renamed the Classic after that cinema in Western Road had closed, and it then closed itself in October 1980. The new road layout opened in the summer of 1984. The Sainsburys superstore opened on 23 April 1985 on the site of the railway viaduct and Arthur H.Cox’s pill factory, and won the 1985 Brighton Council design award with its ‘warehouse’ style, the arches of its walls echoing those of the former viaduct. {68,68a,123}