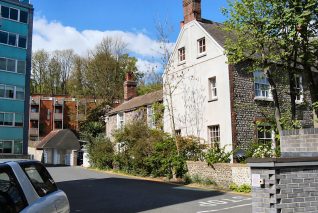 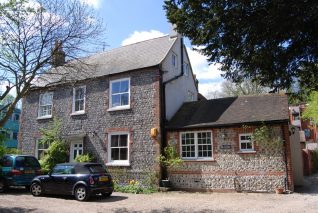 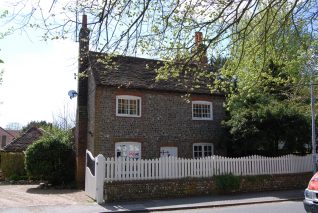 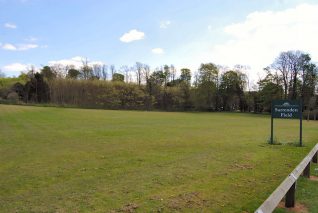 d) WITHDEAN : The small hamlet and farmstead of Withdean stood beside the London Road to the north of Tongdean Lane , and three original buildings remain. (For further details of the hamlet, estate and park see ” Withdean “.) On the western side of the road stands a large, listed farmhouse of about 1800, faced in flint and pebble dash and now divided into two cottages, Karibu and Tabora. The adjacent Tabora Forge is a single-storey flint building now converted into a dwelling. The roadway alongside Tabora and Tabora Forge was the road to Tongdean Farm until Tongdean Lane was diverted by the construction of the railway in 1840. Nearly opposite in Peacock Lane is Home Farmhouse, an early-nineteenth-century listed building faced in knapped and squared flint; a pond once lay between it and London Road {44,107}. The nearby open space at the bottom of Surrenden Crescent covers 5.65 acres and is known as Surrenden Field. It once belonged to Home Farm, and in 1900-1 was the home ground of Brighton and Hove Rangers, the forerunners of Brighton and Hove Albion F.C . {126,215}.
The Withdean area has been developed since the 1850s, firstly with the large villas mentioned above, then with suburban housing. Since the 1930s, and especially in the 1960s and ’70s, many large blocks of flats have replaced the villas and farm buildings along the London Road at Withdean.