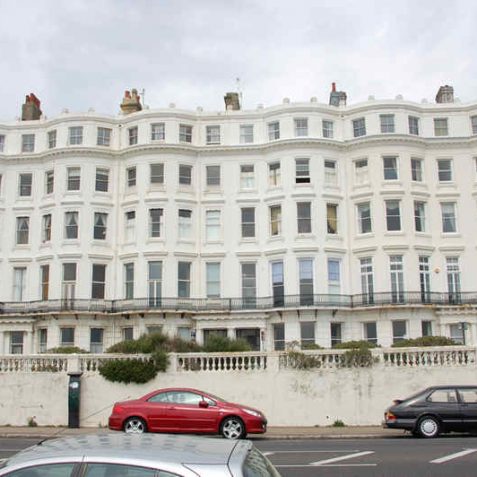 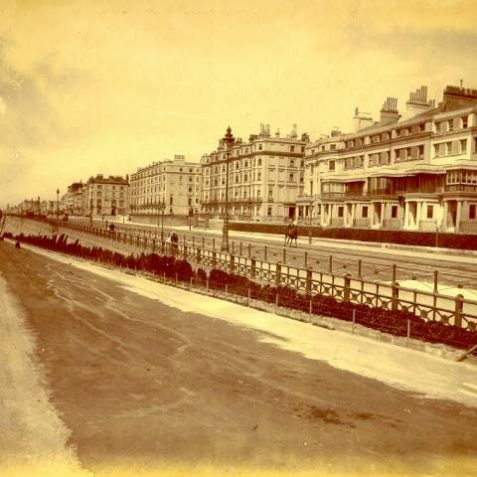 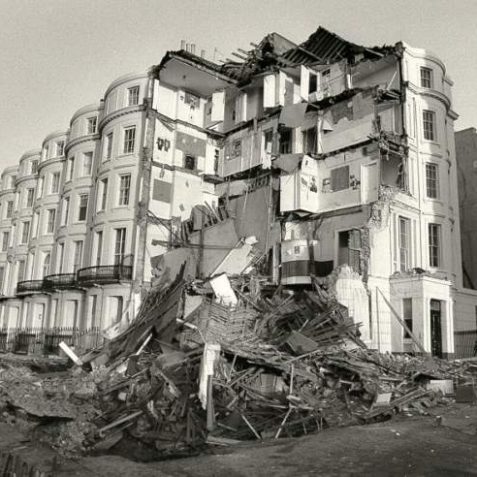 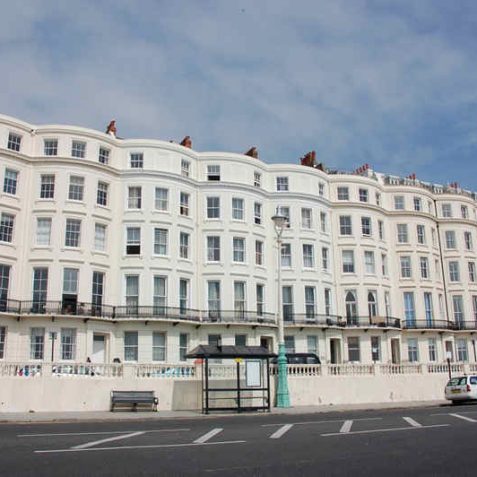 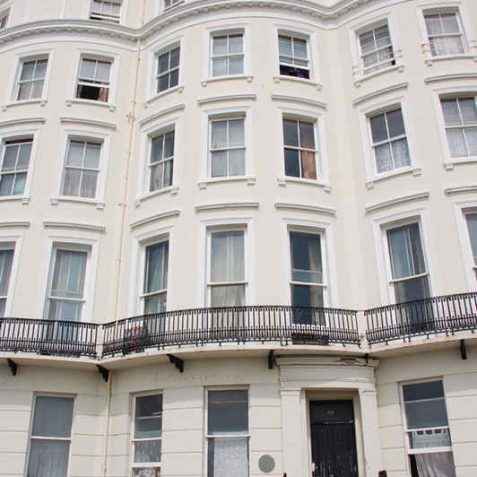 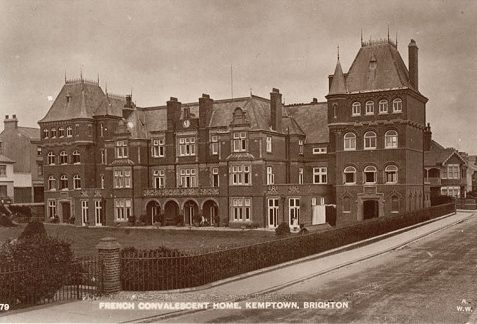 French Convalescent Home: This photograph shows the building with both extension towers whidh were added at a later date.
From the private collection of Tony Drury 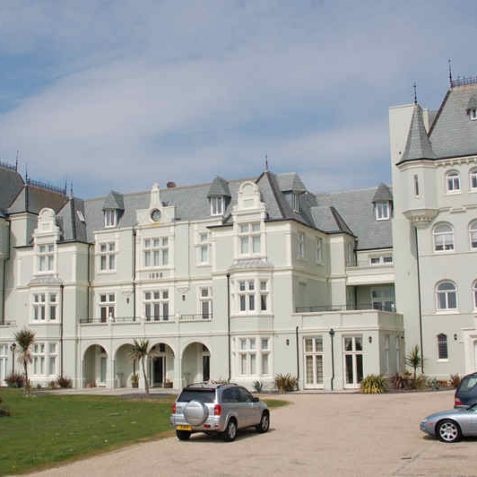 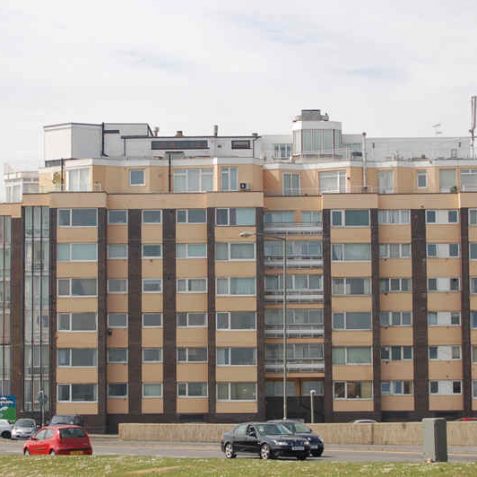 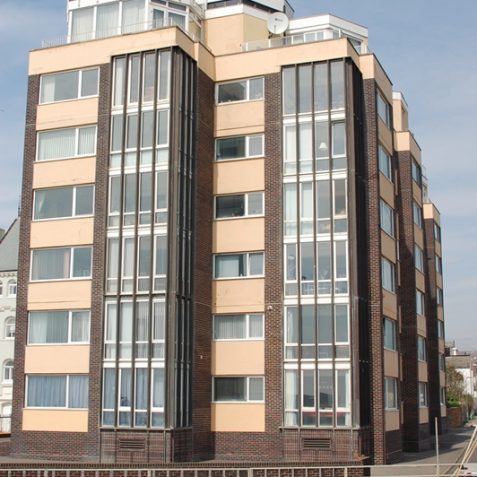 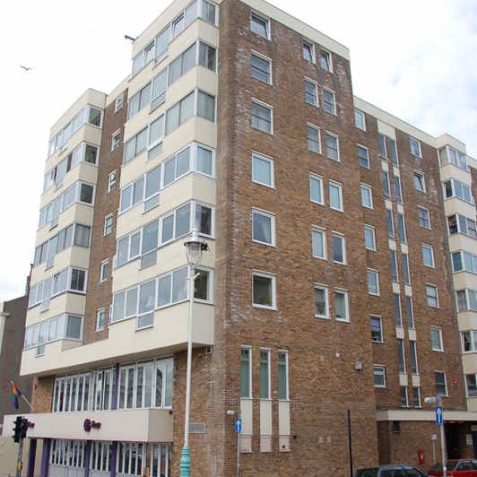 The Albermarle, built on the site of the 19th century Albermarle Hotel
Photo by Tony Mould 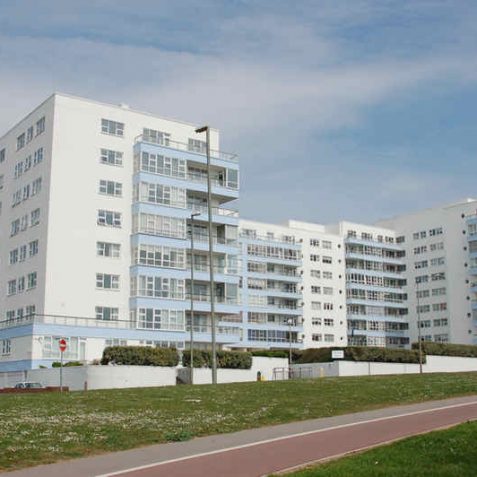 f) CLARENDON and PERCIVAL TERRACES: Both terraces were developed for W.Percival Boxall of Belle Vue House, who had purchased the land from Thomas Cubitt. The five-storey bow-fronted houses were built by Cheesemans, and George Cheeseman junior may also have been the architect.
The ten listed houses of Percival Terrace were erected in 1845-50. No.5 was the home of philosopher Herbert Spencer for several years, while no.4 was occupied by architect and writer Sir James Knowles from 1903 until 1908. However, on 13 November 1987, the front of no.10 completely collapsed as a large crater opened up in front of the house, and no.9 has also now been demolished. Clarendon Terrace has six listed houses with Doric porches, two of which were occupied by 1856 and five by 1859. {44,46,311}

g) FRENCH CONVALESCENT HOME: Standing at the Black Rock end of Marine Parade , with an entrance in De Courcel Road, this large building was designed by Clayton and Black for the French Government and opened in 1896 as a convalescent home in connection with the French Hospital in Shaftesbury Avenue, London, to give accommodation to poor and aged Frenchmen and women resident in Britain. The foundation stone was laid by Baron de Courcel, the French ambassador, and the home is run by the Sisters of St Paul of Chartres. {83,311}

h) FLATS: The Albemarle, an eight-storey block between Steine Street and Manchester Street , was completed in 1970 on the site of the early-nineteenth-century Albemarle Hotel, which had been demolished ten years earlier. At Arundel Street, Courcels is a seven-storey block built in 1971 on the site of some late-nineteenth-century houses known as Madeira Mansions. No.19 Courcels was the home of actor Wilfred Pickles for about ten years until his death in March 1978. {83,83a,123}
Marine Gate is a very large, eight-storey block of 105 flats just beyond the end of Marine Parade at Black Rock . It was erected around an open quadrangle in 1937-9 to the design of Maurice Bloom, and included a large public restaurant until it was converted for further residential accommodation in about 1955. The block’s proximity to the gas-works prompted a good deal of bombing during the war, and it received a direct hit in 1944. {3,45a}