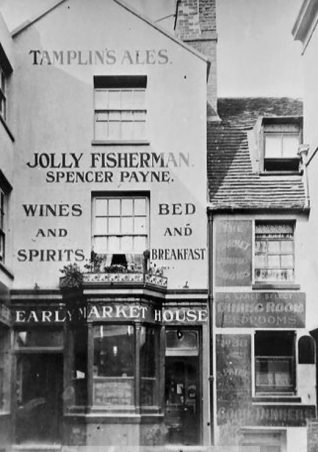 The section of Market Street south of Bartholomew’s was formerly known as Little Castle Square, and on its western side had stood the Jolly Fisherman from around the late 1700s. Sitting at the end of a short cul-de-sac, with its frontage secluded by the two adjacent buildings, it serviced the needs of the market traders and operated under a special license that permitted its opening from 4am.

The pub had an unfortunate history with regards the publicans’ wives. On 1st February 1866, at about 23:00, ‘mad John Leigh’ burst into the pub and shot the landlady, Harriet Horton, from a distance of about two feet. The shot struck her on the right side and passed straight through her. As she collapsed upon a customer, Leigh fired a second shot that struck her in the spine. Two more shots were fired, one hitting the customer in the temple. Harriet was Leigh’s sister-in-law and he blamed her for his marital problems. She died the next day and Leigh was subsequently hanged at Lewes gaol for her murder.

Death of another landlady

We can see, from the photograph, that Spencer Payne was the landlord at the time it was taken. During the 1920’s his wife, Amy Jane Payne, fell in the pub and died of a brain injury after fracturing her skull. The pub was closed on the 8th February 1939, not long after the picture was taken, and the surrounding area was subsequently redeveloped.