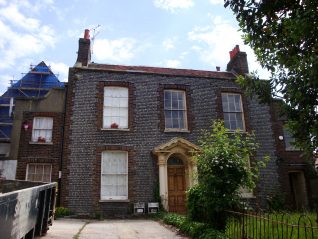 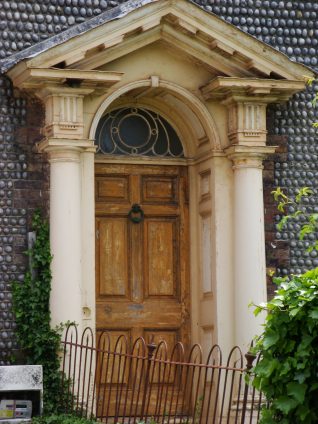 zoom
The farmhouse has a Doric doorway
Photo by Carol Homeward

Mighell Street running off of Carlton Hill. There isn’t much left of it except a garage and a beautiful old flint cottage. Originally it ran between Carlton Hill and Edward Street until most of it was demolished and the Amex building was built.

Extract from ‘The Encyclopaedia of Brighton’ by Timothy Carder

Mighell Street was demolished in the early 1970s for the Amex House development and only nos. 34-35 now remain, an early-nineteenth-century listed farmhouse now divided into two dwellings; its cobbled facade and Doric doorway are unfortunately obscured by fences and trees. Mighell Street Hall stood on a site now occupied by the Amex House forecourt in Edward Street. It was built in 1878 as a Strict Baptist chapel by T.Boxall on the site of the Globe music hall, and was used as St John’s Church Hall from 1910 until 1927, and then a spiritualist church until it was demolished in about 1965