I grew up in Nile Street, leading into Market Street, in the 1950s and 1960s. The southern end of Market Street always had a bombed-out appearance with the remains of the market used as a car park, and some small crumbling WWII concrete buildings. It was a weed-strewn wasteland, until the whole area between Black Lion Street and Market Street south of the Town Hall, was swept away in the disastrous 1984 redevelopment. 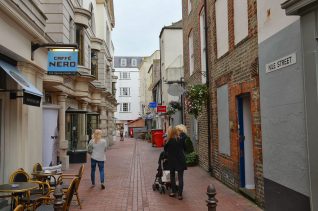 Nile Street photographed in 2013: click on the image to open a larger view in a new window 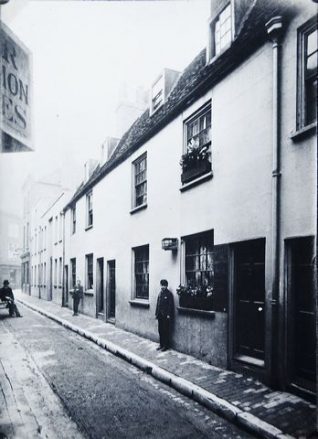 Nile Street dates from the late 18c, being named after the Battle. Originally it consisted of small private houses, some of which are shown here. Gradually the street became commercialised, and in 1889 these houses were demolished, the site being absorbed into business premises.

Roughly where Nile Street joined Market Street, on the opposite side of the road from Nile Street, was a cheap cider bar that in the early 1960s often had the odd late evening punch up. Next door, and to the south, was the Nanking Chinese Restaurant. It was a towering building that was gutted and turned into an up-market shopping arcade.

I have been told  that in 1947 or 1948, it was apparently the first Chinese restaurant in Brighton. I remember three generations of Chinese working and possibly living there. There used to be private Chinese New Year parties, with regular patrons invited, where your drink would be topped up with whatever bottle was to hand.

Incongruously, next to the Nanking Chinese Restaurant, on the corner, was the SPCK Christian Bookshop. The Teds, Mods and Rockers often drank or fought in the cider bar. Usually they ate afterwards at the Nanking. You would certainly see some strange sights back then. Sometimes, having had too much to drink, they could be seen running up Nile Street to avoid paying, but pursued by cleaver-waving Chinese cooks.