You are here: HomenextPlacesnextStreetsnextNorth Street, BrightonnextFirst shop opened on 25 July 1808 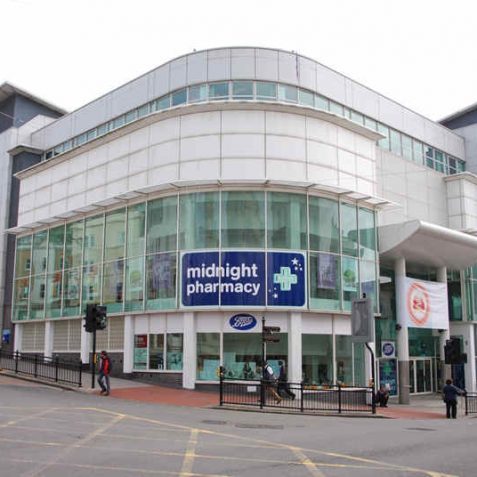 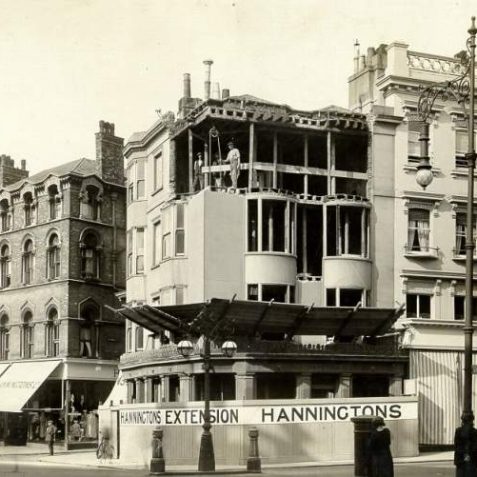 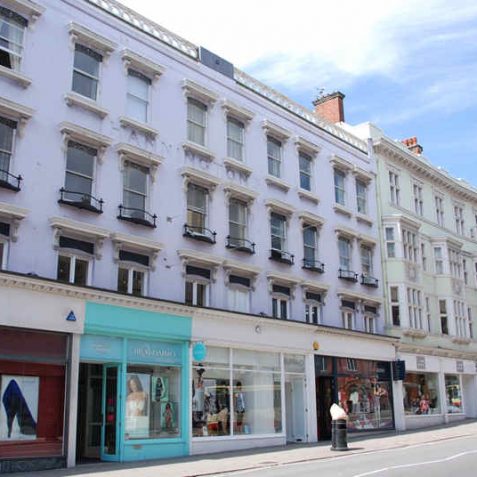 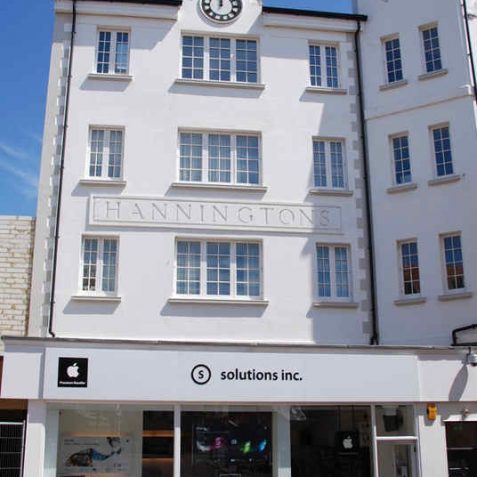 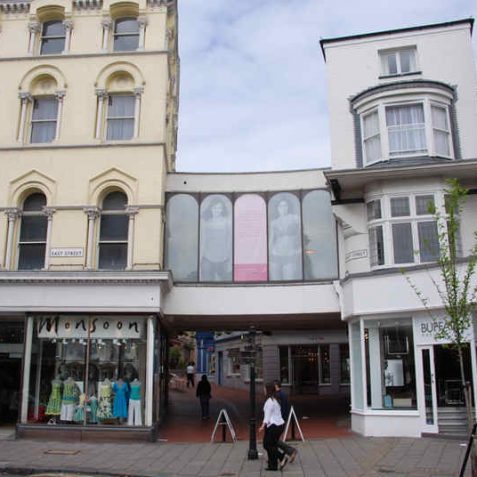 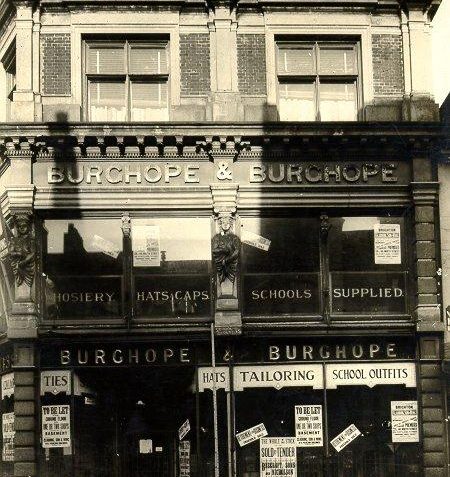 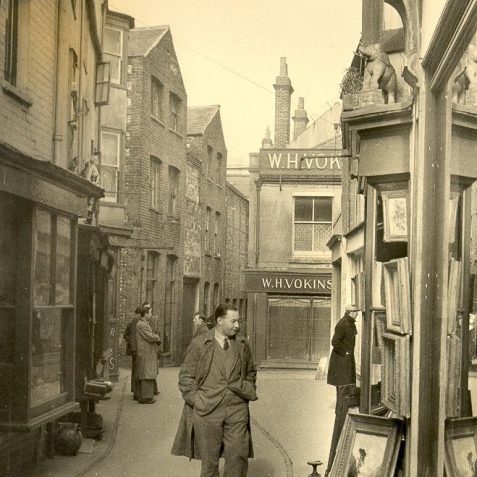 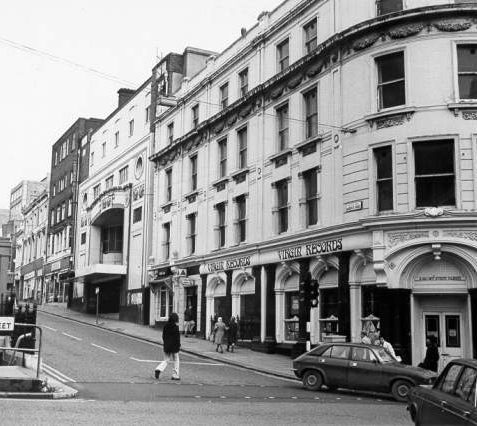 North Street and Queen's Road, 28 January 1974: This photograph shows an early Virgin Records shop at the western end of North Street. Nearby the Regent Cinema is closed awaiting demolition. Both of these buildings were demolished in 1974 and the site is now occupied by Boots the Chemists. A blue police box can be seen above the now filled-in public toilets under the clock tower
Image reproduced with kind permission from Brighton and Hove in Pictures by Brighton and Hove City Council 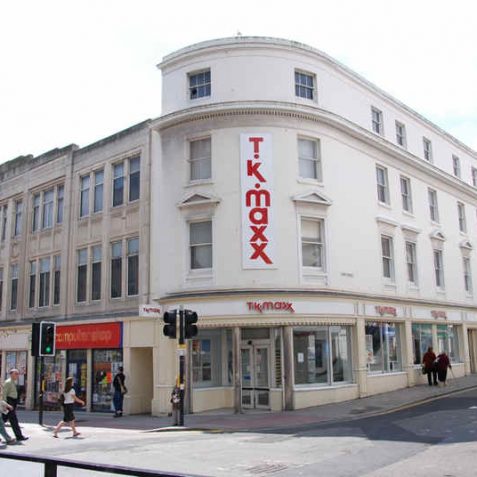 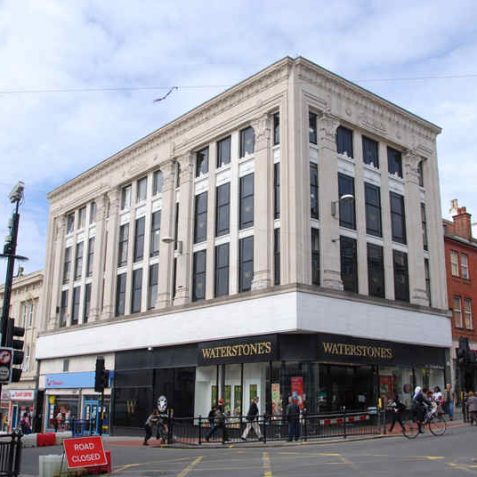 Decorated with pilasters and unusual capitals
Photo by Tony Mould 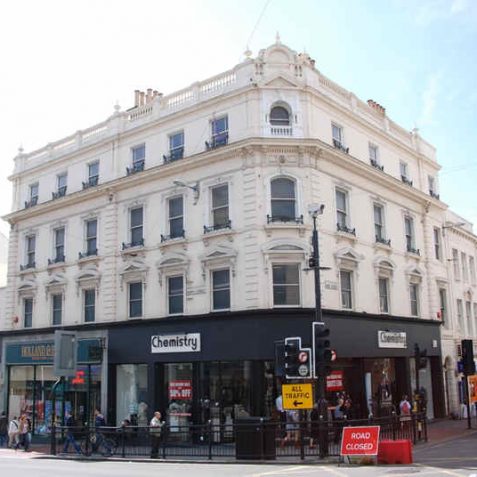 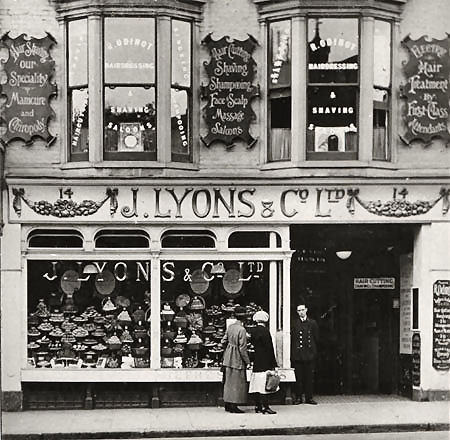 This is a photographic print of J. Lyons & Co's tea room at 14 North Street, Brighton. Two women can be seen admiring the large selection of cakes in the front windows. Signs in the upper storey windows indicate that this is the premises of R. Odinot's Hairdressing & Shaving Salon. Joseph Lyons & Co. was one of the largest food manufacturers of the 1900s. The company's tea rooms were hugely popular, especially amongst the working classes. They were also known for the care taken in the design and decoration of their shops. In spite of its success throughout much of the century, Lyons & Co's fortunes declined in the late 1960s. By the early 1980s, the company had been broken up and sold to various buyers.
Image reproduced with kind permission from Brighton and Hove in Pictures by Brighton and Hove City Council

b) STORES: North Street also has three of the largest stores in Brighton. The Vokins family firm was founded as Leeson and Vokins in 1882, but the present department store in North Street was built in 1935. The Boots store is one of their largest in the country; it was built in 1979 on the site of the Regent Cinema to the modernistic design of Derek Sharp, contrasting sharply with the other corners at the Clock Tower. {123,124}

Hanningtons Ltd has premises in North Street, East Street  and Market Street , and is surpassed in size only by the Brighton Co-operative Society’s store in London Road . The first shop was opened at 2 North Street by Smith Hannington on 25 July 1808, selling linen, drapery, mercery, haberdashery and hosiery. Six years later the shop was extended along North Street, and it received a royal warrant from Queen Victoria. Smith Hannington died in 1855, but by 1885 several other premises had been purchased and 300 persons were employed. ‘Hanningtons Corner’ at East Street and North Street was acquired in 1924, but was damaged by a bomb in the last war. Property purchases in 1960 and 1976 now give the store a continuous frontage along North Street from East Street to Huntingdon House; this main facade is rather attractive in its pale blue colours, and has many small decorative details. Nos.6-9, with decorated angular bays, were originally the Brighton Union Bank, later Barclays, and were taken over in about 1959. A bridge over Market Street linking the North Street and East Street  (1883) premises was added in 1989. The last family owner of the business, Dorothy Hannington, died in 1969 and the shares, which were bequeathed to the Royal Sussex and LondonHospitals, were then acquired by a commercial organisation with the store valued at over £1 million. {15,123,258,263a}

Burtons , at the corner of West Street , has pilasters, unusual capitals, and the name of the store emblazoned in the stonework; it was built in the 1930s in conjunction with the widening of West Street. Another interesting store is Dunns, 63-66 North Street, which overlooks Churchill Square and Western Road. It was built in 1858 as the Brighton Drapery Establishment of Joseph Smith, and is adorned with cupolas and the arms of other towns in stained glass. {83}

c) INNS: As the principal route into the town from London was via Dyke Road  until the early nineteenth century, North Street naturally had a number of important coaching inns. The only one remaining is the former ClarenceHotel, nos.30-31, which was built in 1785 as theNew Inn and run by a brewer, Mr Whichelo. By 1812 it had a large coffee room, billiards room, ten sitting rooms, twenty-six bedrooms and two kitchens. There were also two stable yards added by William Henwood with room for nearly fifty horses and six coaches, but the music room at the rear was demolished in the 1850s for the erection of Model Dwellings. In 1808 the magistrates’ court was established here, and it returned in 1821-3. In 1830 the name was changed to the Clarence in honour of William IV, formerly the Duke of Clarence, and it continued as a hotel until September 1972. Although initially occupied by squatters, the building remained empty until it was reopened on 25 June 1979 by Lord Rupert Nevill as Clarence House, the head office of the Citizens Regency (now part of the Portman) Building Society. Clarence House is now a listed building, and is faced with cream-coloured mathematical tiles with a Doric porch and elegant lamp. In May 1990 North Street was closed to traffic as Clarence House was in danger of collapse during its conversion to offices. {15,123}

The Unicorn Inn stood on the western corner with Windsor Street and bore the date 1597, but it did not open as an inn until the mid eighteenth century. When it was rebuilt in red brick in 1892, the old town well was discovered, but the inn was again demolished in 1919 to make way for the Regent Cinema. The White Lion stood opposite West Street (before Queen’s Road  was constructed), and also dated from at least the sixteenth century. In 1757 it became the property of brewer Richard Tidy who probably turned it into an inn soon after, but the first definite record was in 1790, and it was referred to by name in 1798. It was a notable centre for cock-fighting at one time. The White Lion was rebuilt in 1821-2, but was acquired by the corporation in July 1872 and demolished in May 1874 for road widening. A new hotel was then erected, but it was again demolished in 1900 and replaced by a bank. A smaller public house was built at the corner of Queen’s Road, now replaced by the Boots store. {15,83}