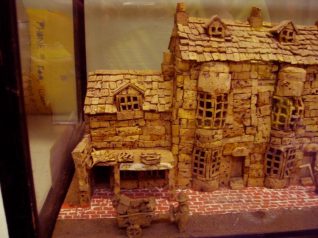 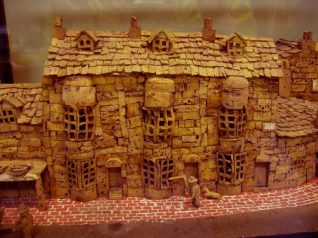 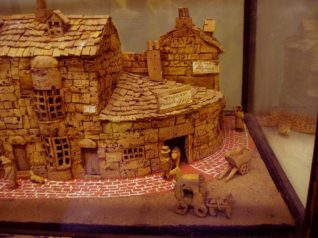 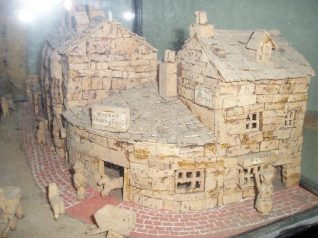 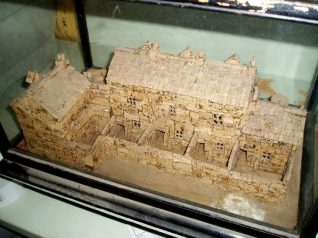 An extraordinary curio has recently come to light after some years of seclusion. It is now being exhibited by the current owners at ‘Ye Olde Curiosity Shop’ in Seattle, USA. The curio depicts the corner of North Street with Upper Russell Street / Western Road as it was in the 1820’s.

What the model depicts
Looking at the model from the front, the shop on the right of the model shows a grocery. Elizabeth HEASMAN had a grocer’s shop in Russell Place in 1824. By 1828 Mary HEASMAN was shown as the proprietor of the grocer’s shop at 22, Upper Russell Street.

The shop to the left of the model is that of John PITT, who was listed as a pipe manufacturer at 72, North Street in 1822. In 1824 and 1828 Ann PITT was listed as a tobacco pipe manufacturer at 72, North Street. Note the collections of pipes on the roof. These might have been display boards, showing the various types of pipes made by the Pitt’s. These boards may have originally stood vertically as a sort of advertisement for the shop.

A shoeing forge
On the corner, to the right of the model is a shoeing forge. Simon WISDEN was a blacksmith and farrier, shown firstly in 1800 at number 60 and then in 1822 and 1824 at 76, North Street. The house numbering changed during this period and the building is most likely the same building renumbered. In ‘A Peep into the Past, Brighton in the Olden Time’, J G Bishop describes the smithy and forge of Simon WISDEN as being “at the top of North Street, on the South-West corner”.

Smithy number two
Nearby was another smithy, Joseph WALLS and VINER’s coach factory & yard. Simon WISDEN also offered accommodation and in his 1800 directory, William Cobby recounts that there was 1 parlour, 1 best bedroom and 1 servant’s bedroom there. Also listed at the same address at this time was Edward WISDEN, a watch maker.

Succeeding Simon was Thomas WISDEN & Son, shown at number 75, North Street in 1828. The WISDEN’s had disappeared by 1832 and by the mid 1860s the site had been redeveloped as a Drapery Emporium belonging to Alderman S H SOPER.

Red bricks and dusty streets
The style of buildings is typical of that period in Brighton. Note the red-brick paving, which was a prominent feature of Brighton streets. The dustiness of the streets was a source of much complaint, but moreover it was often said that the streets ran with ruddy-coloured water after a heavy downpour. Paving stones did not feature until much later. The horse and carriage to the right of the model looks like a ‘brougham’ (pronounced broom), a type popular with the aristocracy of that time, but it could equally well be a four wheeled ‘fly’, the taxi of its day.

The history of the model
The model was originally part of a collection founded by a Victorian taxidermist by the name of Walter POTTER. He was born in Bramber in 1835 and opened a museum of his works around 1860. This was originally housed in the White Lion Inn, Bramber, which was owned by his father. His works became quite celebrated, many depicting scenes of animals in the guise of humans. One of his earliest and most memorable pieces is entitled ‘The Original Death and Burial of Cock Robin’, inspired by an illustration in a book accompanying the well known nursery rhyme. By 1880 the collection was housed in Bramber Museum where it remained until 1972, when it was exhibited next to the Palace Pier, Brighton. It was purchased in 1985 and thence displayed at the Jamaica Inn, Cornwall, until the collection was broken up and sold at Bonham’s in 2003, raising nearly half a million pounds. The present owners acquired the model at that time.