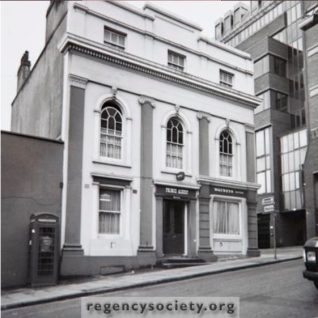 Kids with a 2d bag of crisps

As a small boy I lived at No. 44 Trafalgar Street during 1937-1947 – the side entrance was in Over Street. I knew Bernard Luper ‘The Tailor of Taste’ as he advertised, whose shop was on the opposite corner. Behind him going towards the station was a very large garage that was the home of ‘Unique Coaches’, and just a little further up there was a pub – I cannot remember the name – it had concrete steps leading up to the entrance. I always remember this as there was a constant group of small children outside, usually with a 2d bag of Smith’s crisps, while the parents were inside drinking until closing time.

Going down Trafalgar Street from 44 on the same side there was what I can only describe as the original ‘greasy spoon’ cafe. It used to fill up after the pubs closed with those who had imbibed a little too much. If the noise got too bad my Mother would empty a large jug of water that she kept by the top floor window. When she threw this out, the noise was quickly silenced. Next to this there was a shop on the corner of Trafalgar Terrace. It was known simply as a sweet shop. Inside were shelves of very large bottles full of various types of sweets. There was also a limited supply of groceries. I do remember specifically that a tin of ‘3 Diamonds’ pink salmon cost 3 1/2d whilst the same tin in the London Road was 3d. There was also a ‘penny punch’ where you pushed a steel rod into a paper covered hole and a coloured ball would come out at the bottom. The colour of the ball would decide your prize.

House with a long history

Number 44 Trafalgar Street had quite a history. Way back in the 1800s it was a public house and the moulded border on the high side of the wall, now covered by an advert, can still be seen. I believe there was a painting depicting the actual name of the pub contained within this border. Originally the cellars had a hatch that opened onto Trafalgar Street where the beer barrels were lowered into the cellar. On the opposite side leading down to Station Street was a mass of hoardings and two I remember were for Guinness and Brylcream. Behind the hoardings was the goods station yard and in the early days of the war one could watch, from the top windows of the house, the Local Defence Volunteers [LDV] practising with brooms in place of Lee Enfields. Later they were designated the Home Guard otherwise known as ‘Dad’s Army.’