You are here: HomenextPlacesnextStreetsnextOld Shoreham RoadnextCarlisle Laundry in the 1950s

Carlisle Laundry in the 1950s 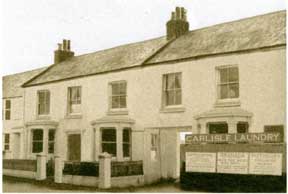 Until the 1970’s road widening, Carlisle Laundry stood on the south side of the Old Shoreham Road at Portslade opposite the junction with Applesham Way (now Tates Garage). I lived in the main laundry house in the 1950s. The laundry itself, and the coalyard were at the rear of the house, and accessed through a passageway that went underneath.

I have a number of photos of my grandmother and her laundry staff in the 1920s and 1930s, and one inside the laundry itself, but nothing of the front of the building. I have produced this computer generated picture from memory, showing the house and passageway. I would be very interested to know if anyone has an actual photo.