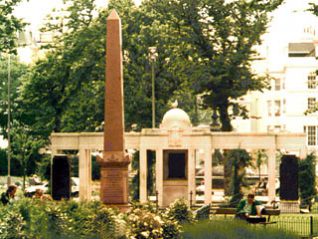 “This picture is taken in Old Steine of a marble obelisk war memorial to soldiers of the Royal Sussex Regiment who went to the Sudan to try to rescue General Gordon only to see the Union Jack lowered and the Moslem flag raised over the city of Khartoum. Behind the marble obelisk is a rather sombre memorial to the tens of thousands of soldiers who were killed in the great war 1914-1918 and the second world war 1939-1945.”