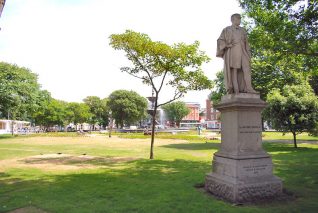 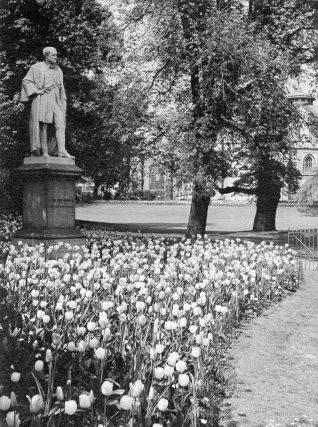 zoom
Statue of Sir John Cordy Burrows, pre 1984: This statue of Sir John Cordy Burrows was unveiled on 14 February 1878 at the southern end of the Pavilion grounds. Born in 1813, Burrows came to Brighton in 1837 to practice as a surgeon, and was an elected alderman to the first borough council in 1854. He was mayor of Brighton in 1857, 1858 and 1871. Upon his funeral in 1876 an estimated 25,000 people lined the streets of Brighton. In 1984 the statue was moved to its present position in Old Steine.
Image reproduced with kind permission from Brighton and Hove in Pictures by Brighton and Hove City Council

c) THE STEINE TODAY: The Old Steine is, topographically, the natural centre of the town, and has been a public transport terminus since 1904 when the tramways were extended from Victoria Gardens . Motor traffic was made to flow one-way from 1926. The gardens now cover 1.44 acres. At their south-western corner stands an oak tree planted on 21 July 1880 by the mayor, Henry Davey, to commemorate the centenary of the founding of Sunday schools in the town. The bicentenary was marked with a tree planted in the south-eastern section by mayor John Leach on 13 December 1980, but this was one of the victims of the great storm of October 1987 which uprooted many of the fine trees in the gardens which had stood for 141 years since 1846. {115,126,311}

d) SIR JOHN CORDY BURROWS: The statue of Sir John Cordy Burrows looks out from the Steine towards Royal York Buildings. Born in 1813 at Ipswich, he was apprenticed as a surgeon in Suffolk, studied in London, and came to Brighton in 1837 to practice. He co-founded the Royal Literary and Scientific Institution in 1841, and was elected as an alderman to the first borough council in 1854. Burrows was mayor of the town in 1857, 1858 and 1871, the first to achieve the position both twice and three times; he also chose the town’s motto, In Deo Fidemus, and was nicknamed ‘King Cordy’ because of his influence. Knighted in 1873, he died on 25 March 1876 and his funeral was attended by thousands; shops and businesses closed for the procession of 2,500 people, and an estimated 25,000 to 30,000 mourners lined the streets. The marble statue, designed by E.B.Stephens, was erected ‘by his fellow townsmen as a mark of their esteem’ at the southern end of the Royal Pavilion grounds, and was unveiled on 14 February 1878; it was moved to its present position in about 1984 when the Pavilion grounds were remodelled. {115,296}