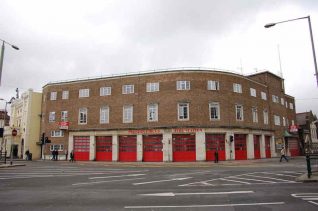 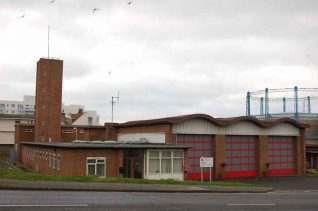 In the early years of the nineteenth century fire-fighting in Brighton was principally in the hands of individual fire insurance companies which employed groups of fire-fighters to attend blazes only on premises insured by that company; the Parish of Brighton also possessed a single primitive fire-engine {112}. To improve the situation, the 1825 Brighton Town Act authorised the town commissioners to provide further fire-engines, and in 1831 they established the town’s first fire service.

a) BRIGHTON FIRE ESTABLISHMENT: Established on 5 January 1831, with one salaried and uniformed engineer, twenty-eight men paid for attendance at fires, three fire-engines, and a fire escape ladder which was kept at the Town Hall . In the 1850s arrangements were made with the Brighton, Hove and Preston Constant Service Water Company to use mains water, and by the 1860s an engine and escape were being kept at Grafton Street police station, a reel at the Level police station , a reel at the Western Road toll-house, and a reel at the Elm Grove workhouse. However, the Fire Establishment was disbanded when the police fire-brigade was formed in 1881.

b) BRIGHTON VOLUNTEER FIRE-BRIGADE: Inaugurated on 14 October 1867 at the Town Hall , the volunteer brigade moved soon after to New Road (where the Pavilion Theatre now stands), then to Upper Russell Street in 1869, and finally to 4 Duke Street (now Browns Restaurant) in 1875. The brigade was funded by subscriptions from insurance companies, and was initially loaned two fire-engines, while the forty-six volunteers provided their own uniforms. They engaged in a friendly rivalry with the police brigade from 1881, but in 1902 the corporation purchased the Duke Street premises and the volunteers were placed under the overall control of Inspector La Croix of the police fire-brigade. On 9 June 1921 the volunteer brigade attended its last fire and was then disbanded following the formation of the county borough fire-brigade.

c) BRIGHTON POLICE FIRE-BRIGADE: The police turned out with the town’s fire escapes as well as the volunteer brigade and the fire establishment, but after a serious fire in Queen’s Road in 1880, an official police fire-brigade was formed at the Town Hall in 1881 under Superintendent Thomas Gibbs. Following several bad fires over a number of years, the brigade was reorganised under Inspector Victor La Croix, formerly of the volunteer brigade, who remained in charge until 1921. (La Croix was, incidentally, the first holder of the mayoral car number plate, CD 1.)
By 1897 there were twelve police fire stations throughout the town, all connected to the headquarters at the Town Hall by telephone. In 1898 the headquarters were moved to the site of the present Corn Exchange entrance in Church Street , but in 1901 a new headquarters was established on the site of the Amber Ale brewery at Preston Circus. The police fire-brigade was disbanded in 1921 when the county borough fire-brigade was formed.

d) BRIGHTON COUNTY BOROUGH FIRE-BRIGADE: Following a bad fire in December 1920 at the corner of Duke Street and West Street , much criticism was levelled at the arrangement of police and volunteer brigades. Consequently, a full-time, fully trained corporation brigade was established at Preston Circus in May 1921 under chief officer Stanley Thorpe, with the police and volunteer fire-brigades disbanded.
Following the creation of ‘Greater Brighton’ in 1928, when the brigade had forty-five men and six vehicles, the branch police and fire stations were closed, but an eastern fire station was established in an adapted building on the northern side of West Street, Rottingdean . On 21 May 1938 a new headquarters building at Preston Circus, designed by Graeme Highet in Portland stone and brick, was opened by Earl Winterton. During the war fire services were nationalised from August 1941; the National Fire Service, which used the Ocean Hotel at Saltdean as a training college, continued until 1 April 1948 when the county borough council resumed control. In February 1957 Roedean (Brighton no.2) fire station was first used, replacing the Rottingdean station, and in the following year the public street fire-alarms, installed in 1904, were deemed unnecessary and were removed.
The four Chief Officers of the Brighton County Borough Fire Brigade were:

On 1 April 1974, following the 1972 Local Government Act, the fire-brigade became the responsibility of East Sussex County Council. The Preston Circus station is now the headquarters of ‘A’ Division, covering the coast from Hove to Seaford and inland to Lewes and Barcombe; it answers about 2,500 calls each year with up to six appliances.
Any numerical cross-references in the text above refer to resources in the Sources and Bibliography section of the Encyclopaedia of Brighton by Tim Carder.
The following resource(s) is quoted as a general source for the information above: {83,156-157a}