You are here: HomenextPlacesnextStreetsnextRegency SquarenextSt Alban's House and the War Memorial 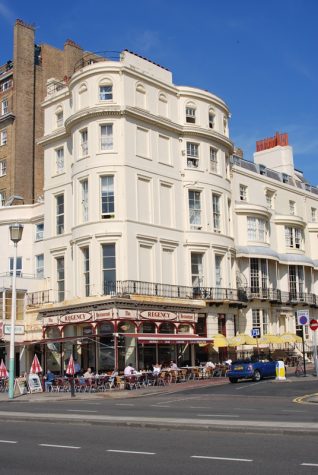 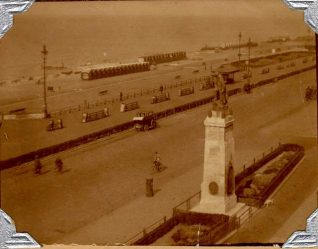 zoom
Royal Sussex Regiment War Memorial, c. 1910: At the southern end of Regency Square is the Royal Sussex Regiment War Memorial, a Portland stone cenotaph unveiled in 1904 to 152 men who died during the Boer War of 1900-2. This bronze bugler, surrounded by four artillery shells also commemorates soldiers killed in the two World Wars.
Image reproduced with kind permission from Brighton and Hove in Pictures by Brighton and Hove City Council

c) ST.ALBANS HOUSE: No.1 Regency Square, together with 131 King’s Road, is a grade II*-listed building designed after the rest of the square in 1828-30 by A.H.Wilds; it is decorated with his familiar shell motifs. Originally known as Regency House, it was taken by the Duke and Duchess of St Albans in July 1830 and became one of the centres of Brighton society. The Duchess, formerly the actress Harriot Mellon, married first one of the richest men in England, the banker Thomas Coutts who was forty-two years her senior, but following his death she married the ninth Duke of St Albans, twenty-four years her junior. The Duchess died in 1837.

d) ROYAL SUSSEX REGIMENT WAR MEMORIAL: Standing at the southern end of the square, this Portland stone cenotaph was erected to the 152 men of the regiment who perished in the South African or Boer War of 1900-2. It was unveiled on 29 October 1904 by the Marquess of Abergavenny, and is surmounted by a bronze bugler and four artillery shells. Now a listed structure, it also commemorates the men lost at Louisberg and Quebec in 1759, in Egypt in the 1880s, and in the two World Wars.