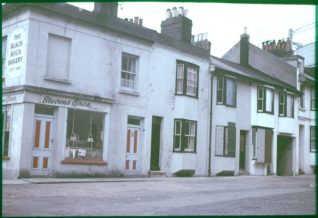 zoom
The east side of Rifle Butt Road in September 1971, from the corner of Marine Parade
Photo by David Fisher 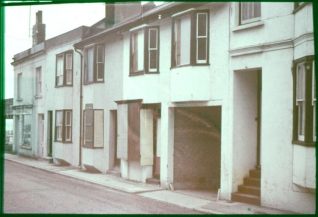 zoom
The east side of Rifle Butt Road in September 1971, looking towards the sea
Photo by David Fisher

Rifle Butt Road is one of the ‘lost streets’ of Brighton. Built in the late 1860s, it was removed in the 1970s to make way for the approach road to the Marina. Within living memory it was part of a lively community at Black Rock. In its length of no more than 200 yards it included a bakery and other shops, a Quaker burial ground, a builders yard, a gas works and housing. In the days before the National Health Service there had also been a branch of the Brighton, Hove and Preston Provident Dispensary, providing low-cost health care. The bakery pre-dated the road: its painted sign says it was established in 1856.

By the time these photos were taken in September 1971 the street’s days were clearly numbered and it has the forlorn look of a place awaiting the developers. The bakery is still there on the corner but other shops and houses were already boarded up. The gas holder on the corner with Roedean Road can be seen over the rooftops.