You are here: HomenextPlacesnextStreetsnextRifle Butt RoadnextMemories of life in the 1920s 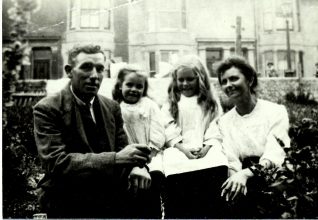 The photo shows Frank Groves, Florence Groves, Winnifred Groves and Margaret Groves (nee Kite), in their garden with Rifle Butt Road in the background. Click on the image to open a large version in a new window

My mother died last year and among her things we found some writings about her life. Her father was Frederick James Groves, known as Frank, and her mother was Margaret Kite. Frank worked at the nearby gasworks. Part of her text is given below, there is more about the games the children played, her best friend Paul Hicks and much more.

“I was born Florence May Groves on the 12th December 1914 in a cottage at the top of the white cliffs that start East of Brighton, England. The cottage was one of 20 and we lived in number 13, which was a two-up – two- down with a small communal yard across which was a small outhouse and our toilet. I remember it had a splintery seat and the door, being made of planks of wood, shrunk by weather, let in enough light for us to read the squares of news paper which every Saturday it was our job to cut and thread with string to make our toilet paper.

There was only a cold water tap in the kitchen, a luxury after having for years shared one outdoor tap four houses down. Our front room window looked out onto a brick path that ran down to number 7; then there was a concrete slope up to the road, but more often it was up the long garden also in front of the house and up over the garden wall. There was another row of houses opposite us, which was Rifle Butt Road;, we were Black Rock Cottages. and we were sort of cut off from the rest of Brighton by the gasworks. It was almost like a small village, there was a bakery, two general shops, a policeman who was a friend to all, but who put the fear of God in us if we were caught doing wrong.

Home was a two-up and two-down cottage, the front of which was whitewashed down each year. The toilet and washroom was over a small yard, and only in later years did we have indoor water, a tap shared outside with five other cottages. Our back bedroom held only our bed and a chest of drawers plus two Sunday school texts on the wall, the kitchen had a small gas stove (we lived in the shadow of the gas works) and a big stone sink. The front room looked out onto a long front garden which joined a street by getting over a low wall. Our street formed a sort of village having two general shops, a bakery and even our own policeman who sort of formed a father figure. We knew we’d better behave because he knew our dad and mum.”

Click on the image below to open a larger version in a new window. Click again to enlarge further. 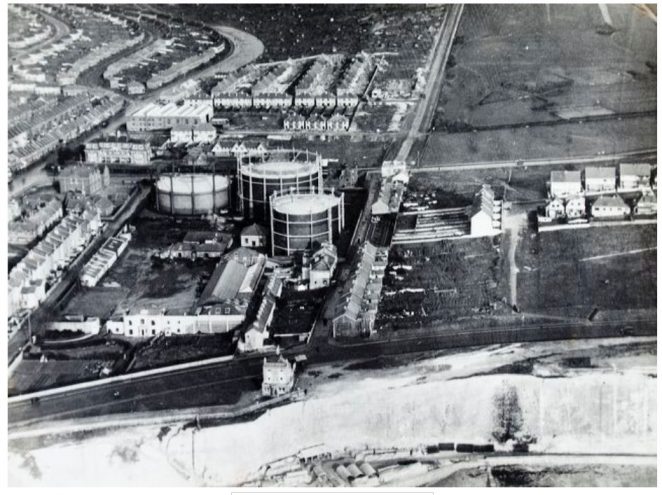 This photograph must have been taken soon after the construction of Marine Drive. The particular interest is that it affords a glimpse of Black Rock Cottages, just behind the Abergavenny Arms and facing the houses of Riflebutt Road. The road running to the left of the gasometres is Boundary Road, until 1928 the eastern boundary of Brighton Borough. The gas works were established here in 1823 just outside the Brighton boundary so as to avoid the duty which was then levied on all coal entering the town. Below the cliff can be seen the works of the contractors engaged on the construction of the Undercliff Walk. Many of the massive blocks of the sea wall were made here.