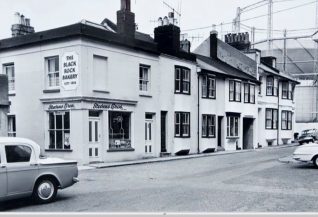 Rifle Butt Road in 1968: click on image to open a large view in a new window

Just as I remember it

The aerial photograph below of the area surrounding Rifle Butt Road, looks almost as I knew it as a kid. My father told me that he remembers the cliff top houses in his childhood, and how they went over the top due to erosion of the cliff. I remember playing in the rock pools on the undercliff beaches in the 1950s and seeing the bricks and other bits of building material, and that is when my dad told me the story of the houses.

We played in ‘the dungeon’

I used to knock around with a lad who lived by the bakery in Rifle Butt Road almost opposite Marine Gate flats, his name was Ray McCarthy (hope the spelling is right). I am sure that he lived with his nan. At the very bottom of the road was some sort of half built concrete building that we played in. We called it the dungeon, it was dark and we took candles with us to see where we were going. Sometimes there were some odd looking characters sleeping there, and we would flee for our lives if we came across one of them.

There was a builder’s yard, and a little cemetery behind a high wall next to the houses. Near the top of the road near to the East Brighton Park, was a pumping station in a big building to the left. There was an overgrown yard next to the pumping station that looked as though it was used as a smithy at some time, owing to the little piles of coal or coke dust. We played in this yard for hours and got filthy.

There was also a garage to the right, next to where the fire station is now. Opposite the garage were allotments, above the John Howard Convalescence Home in Roedean Road. There were loads of blackberry bushes growing on this site. This area was my paper round area, Roedean Road, The Cliffe, Rifle Butt Road and ending up at Marine Gate flats. Happy Days!

Click on the image below to open a large version in a new page. 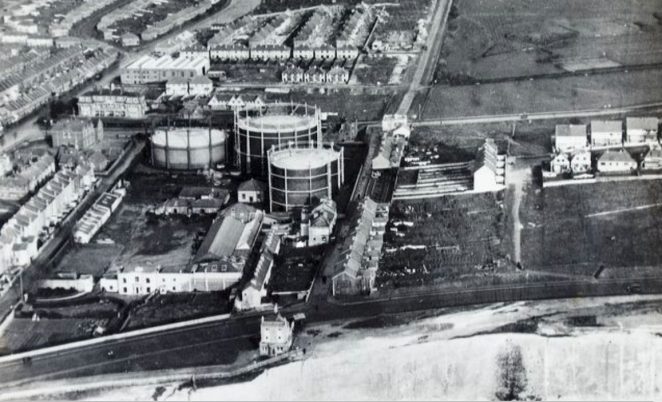 This photograph must have been taken soon after the construction of Marine Drive. The particular interest is that it affords a glimpse of Black Rock Cottages, just behind the Abergavenny Arms and facing the houses of Riflebutt Road. The road running to the left of the gasometres is Boundary Road, until 1928 the eastern boundary of Brighton Borough. The gas works were established here in 1823 just outside the Brighton boundary so as to avoid the duty which was then levied on all coal entering the town. Below the cliff can be seen the works of the contractors engaged on the construction of the Undercliff Walk. Many of the massive blocks of the sea wall were made here